The Jinhao 992 pen is more or less everywhere these days, and frankly, for good reason. I know there has been some controversy with cracking in the past, but in my experience this is a rock solid pen. Admittedly, I do have one of the later versions, so the first gen ones may be significantly inferior.

I have zero points of reference so I shan’t comment beyond that.

Before reading on, please understand that this review is very boring, but that’s okay. In an era where Western companies charge you $30-50 for utter garbage that barely works out of the box, I think we can all be thankful that this thoroughly standard pen that works perfectly for less than a cup of coffee is indeed, boring.

The Jinhao 992 is a very solid (much more solid than other “budget” pens like the Nemosine Singularity or low end Hero’s & Pilot’s) fountain pen made of decently thick transparent plastic that comes in a plethora of hues.

The version below is quite obviously amber (they call it coffee) and in my opinion looks traditionally dope except for one major aesthetic flaw (more on this later). The fit and finish is tight with no manufacturing issues beyond what you would expect of injection molded budget pens.

Really struggling with finding something to say about this pen. It’s a plastic cigar that looks like it rolled off the Pilot/Platinum/Sailor line. Zero quirks beyond its super inexpensive price and consistent performance. 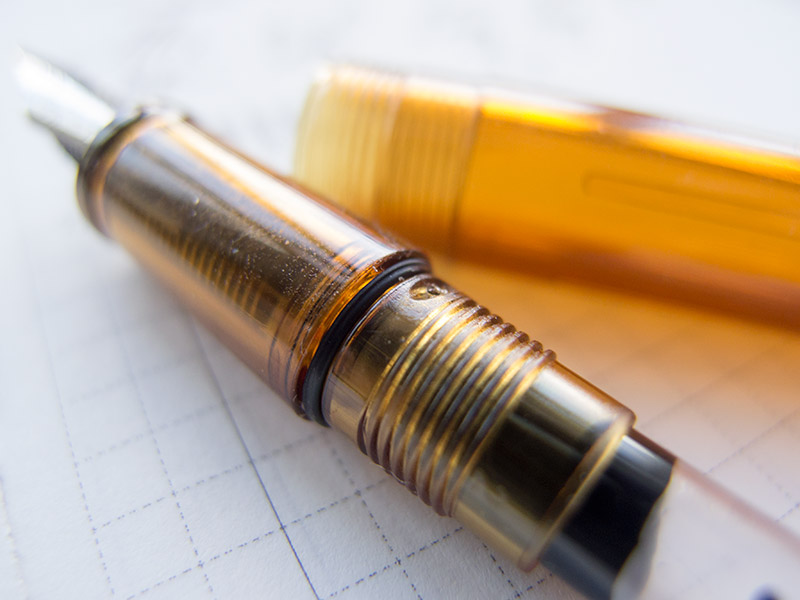 Interestingly, it comes with an o-ring above the threads on the grip section. In practice, it gives you a nice, secure feedback when you tighten it up, but other than that, the real appeal for me is the ability to convert this to an eyedropper (I checked, it is airtight) without requiring silicon lubricant on the threads. Pretty cool and a nice quality of life feature. It also makes the pen resistant to cracking should you over tighten it.

As for the actual performance of the Jinhao 992, it’s pretty boring in a very consistent, buttery smooth sorta way. The nib is thoroughly unexciting, bordering on dull as it dishes out a consistent, wet western F line. Not a nail, but certainly not soft. If you crank down the pressure it will railroad, so I would advise against it.

All in all, nothing else to add. It works perfectly, the feed keeps up with the nib and it starts immediately without requiring any priming, even after a couple of weeks abandoned in a draw. 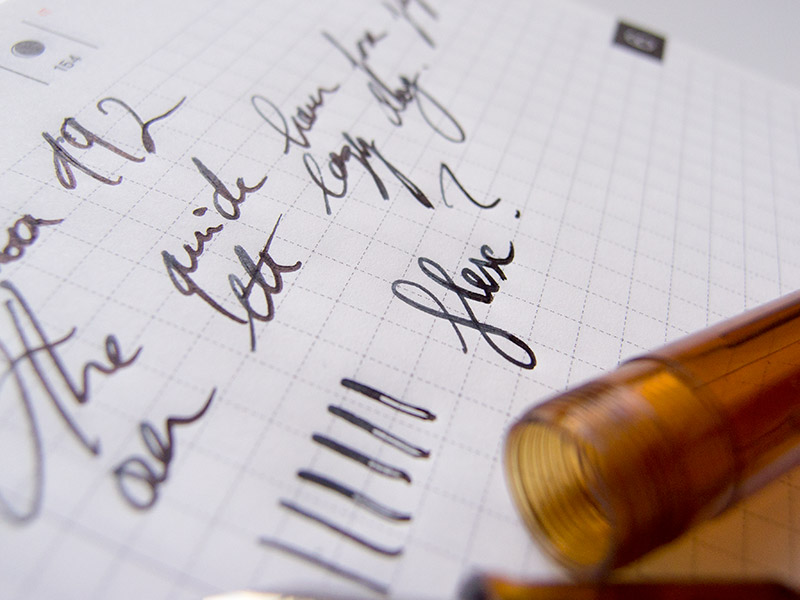 The cap is interesting, the top superficially reminds me of that never dry feature on the Platinum #3776. In practice, I am not sure if it does anything, but the aesthetics are dope & ultimately it adds character. It should also be noted that this is a very light pen due to the lack of brass inserts. Everything is plastic outside of the band around the cap, the nib, and the clip. 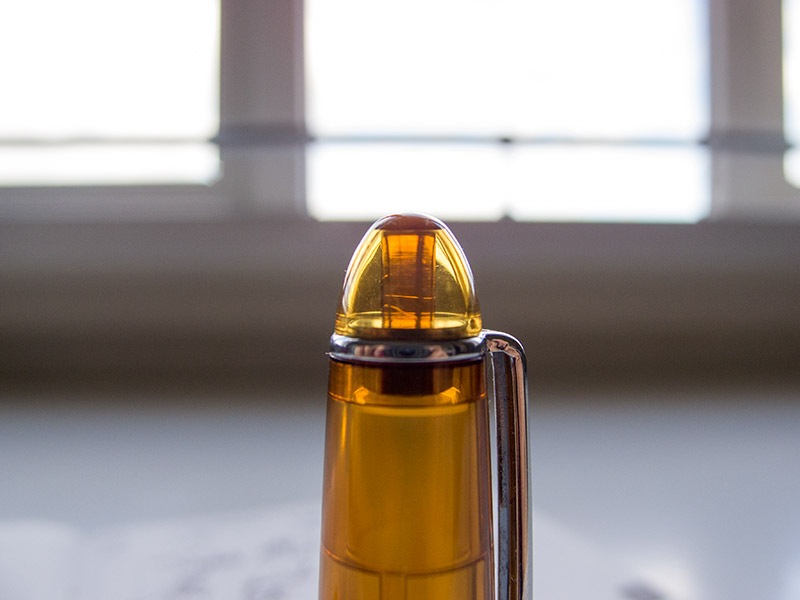 Sadly, the tail end of the pen has too much character. That bulbous thing sticking out is hideous and I imagine it is a byproduct of the injection molding process. I do wish it was tapered nicely like traditional cigar pens, but this is what you get. It looks to me like a separate section that was plugged in. Not sure why as I don’t think manufacturing a uni-body design would be more expensive, but what do I know? 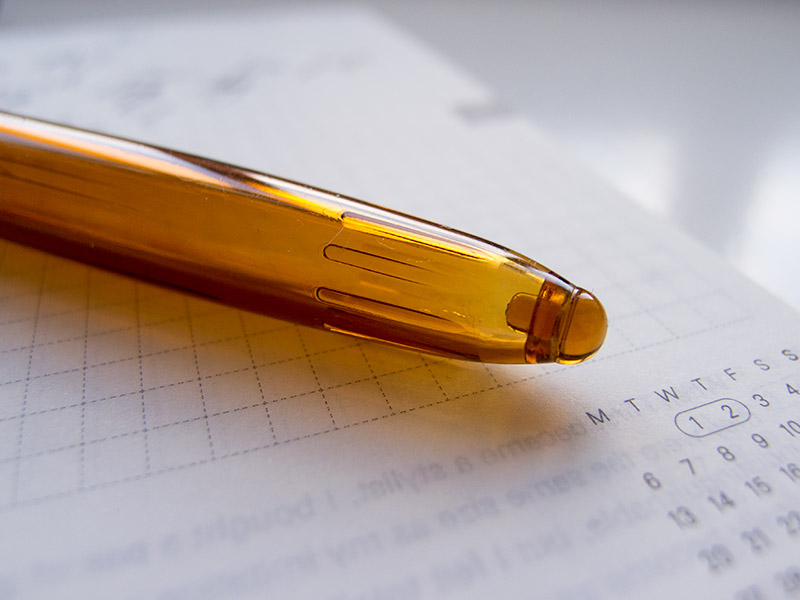 Super short review because this is an honest to goodness worker pen. It has no features or quirks that make it interesting beyond its traditional garb, consistent performance, and translucent appeal.

We are talking about an injection molded cigar pen with standard everything. This is not a criticism because, frankly, for a couple of bucks it exceeds my expectations, but the reality is that there isn’t much to say beyond it works perfectly. 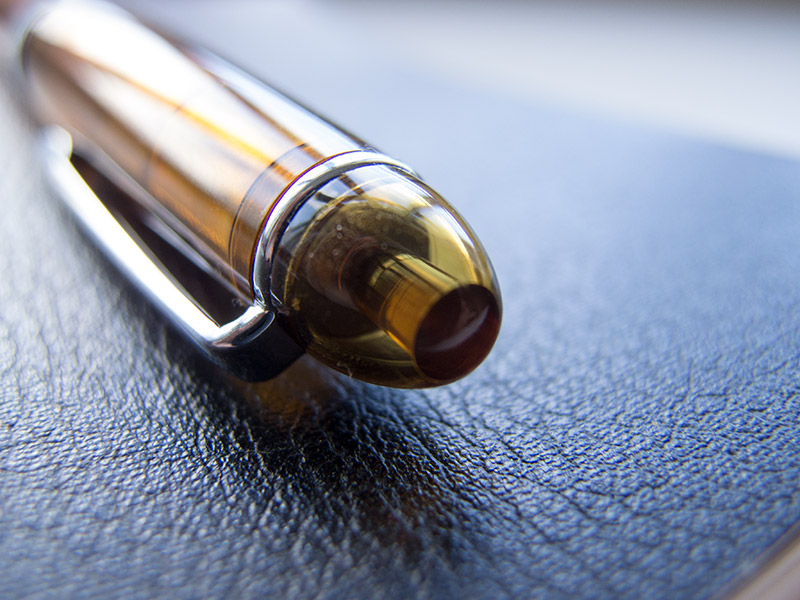 I like the Jinhao 992, but I don’t love it, and I imagine anyone who buys it will feel the same. This is just a really solid everyday performer for a ridiculously low price point that puts pretty much all Western budget pens to shame.