The Platinum #3776 Century is, in my opinion, the gold standard for a mid-sized Japanese cigar (classically) shaped fountain pen. Its price point echos competing options from Pilot with the Custom 74 and Sailor 1911, but in my opinion, when it comes to selling points like unique nib options and interesting materials, I think Platinum wins hands down.

The dimensions put the Platinum Century squarely in the middle of the pack with an overall size of 14 cm. My version is made of a super sexy translucent resin with a burgundy hue that really adds a stunning amount of depth. Its hard to convey what these semi-transparent materials look like without showing them in the flesh. The pen is not quite see-through, but it’s certainly not opaque. In the right light, the nib and gold plating on the converter does shine through, but otherwise, it resembles a very deep ruby.

Certainly not a bad thing. Between that and a standard black resin – I know what I am going to go with!

In terms of aesthetics, the shape is as generic as cigar body fountain pens come. Nothing to write home about, although kudos to Platinum for adding so many flourishes with the multi-level gold plated band and other visual details. It’s not my cup of tea in terms of how busy it looks, and admittedly I bought it only for the very interesting nib (more on this later), but it has grown on me and I do think its high quality resin and aesthetic details allow it to appear “worth the price” to someone who is uninitiated to fountain pens and the stratospheric prices they can attain. Personally, my bias has always been with nib performance, so I don’t place as much weight on such matters as others perhaps would. 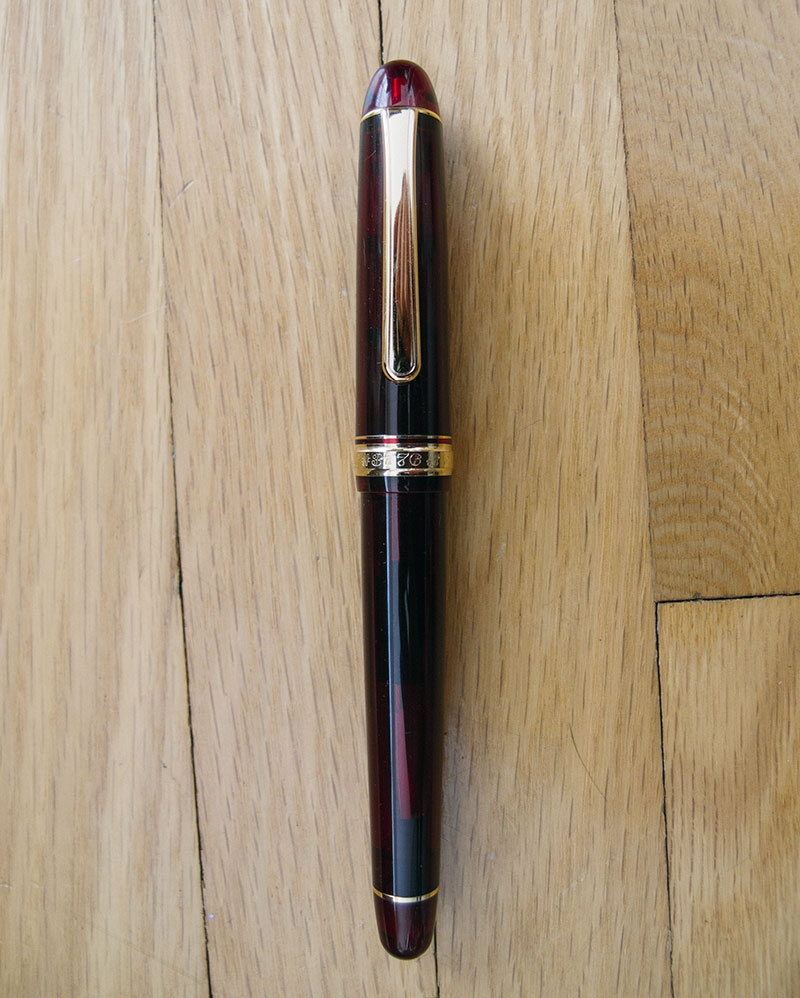 In hand, the pen is extremely light at 25 grams. Some might prefer a heftier pen, although after wielding ebonite pens all week, this feels far more substantial; a by product of the amount of metal contained within. Weight will always fall down to the wielder’s personal bias, as will section width, but for me (personally) this is quite lovely. I have found that after using larger pens like the Montblanc 149 and others, it’s much easier for me to stick to larger designs rather than step down. One becomes accustomed to a wider body and the Platinum #3776 Century is as small as I would comfortably go for an everyday pen. I do own a super thin Cross pen (a Classic Century) and it’s jarring to use. I view it almost as a novelty now as opposed to a proper writing instrument.

Un-posted it’s a touch too short for me. I tend to prefer my pens un-posted, but with the #3776, I do favor having it posted. Then again, your mileage may vary. 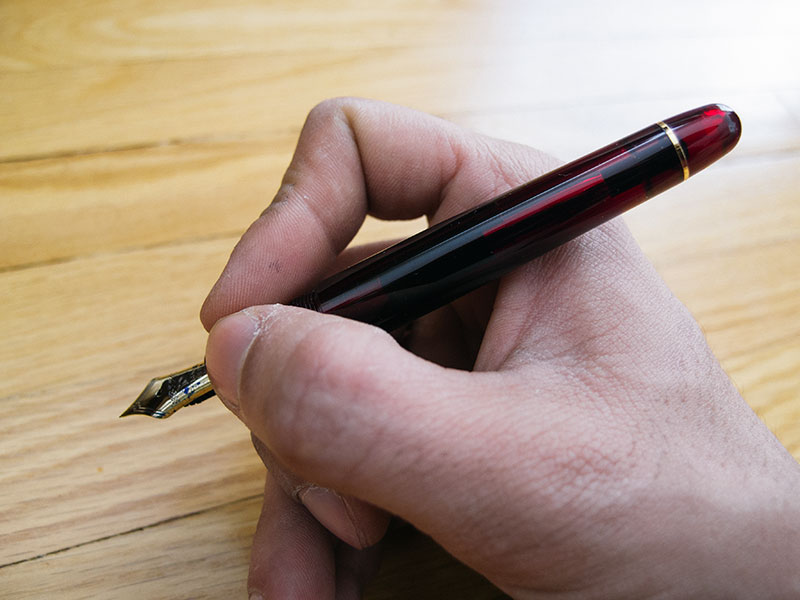 With the cap on, it becomes a far more substantial offering and in my mind a perfect “mid-size” option. The cap sits securely. Frankly, I have no complaints whatsoever with regards to balance or how the pen handles when wielded, even for prolonged writing sessions.

The thumb on my right hand has been broken in the past and never healed properly, so I am prone to have writer’s fatigue, but with the Platinum Century, it handles itself deftly with no quibbles or strains. 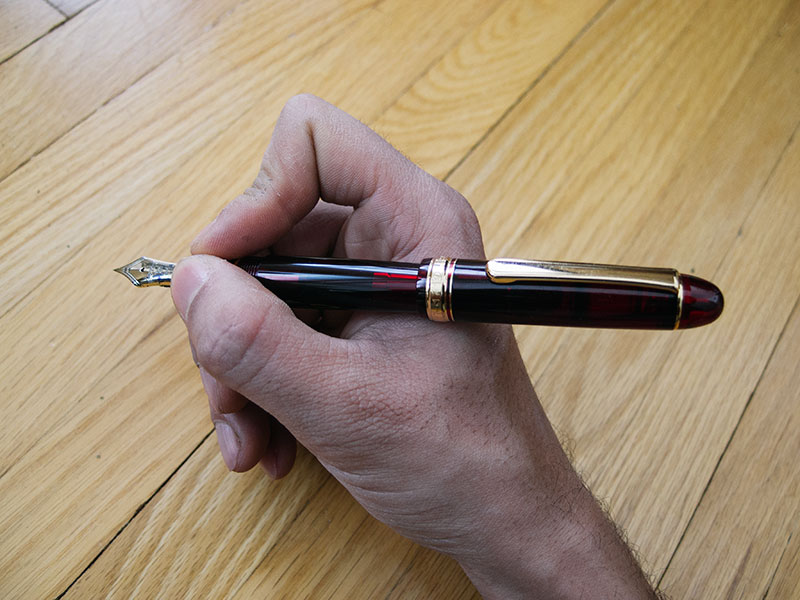 With regards to ink storage options, you are sadly stuck with a converter. I would have loved this pen with a piston option, but as far as converters go, it’s damn good. Definitely not a cheap offering found on low-cost Chinese fountain pens. This one is well constructed with good action and a nice friction fit with the nib section. 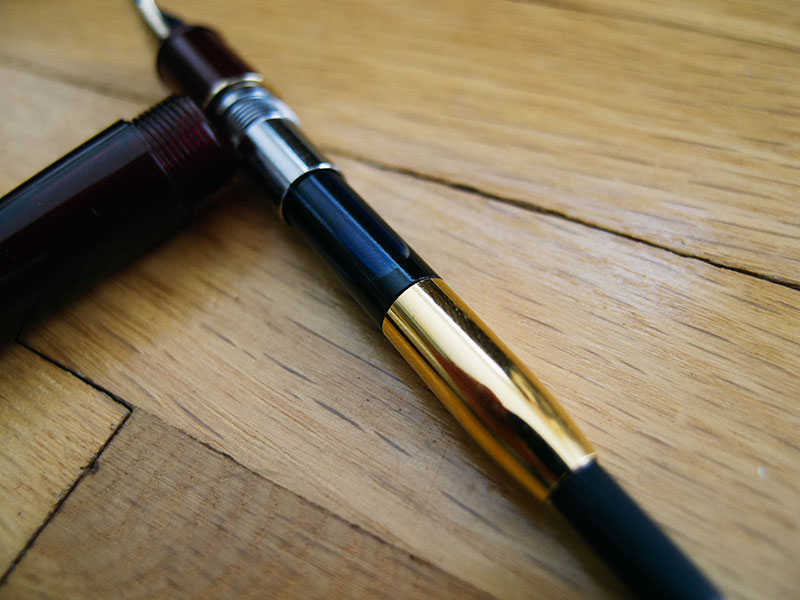 As far as neat (and unique selling point) features go, the nifty cap seal mechanism included is very cool. It[s called the ‘Slip & Seal.’ It was conceived to maintain air pressure and stop the nib from drying out. I recently flew from Toronto to London with this in my bag, hadn’t used it for 6 months or so prior to that, and it started immediately when I tried it – just as soon as the nib touched paper.

I have no substantial way to test this feature beyond saying: it works. As someone who usually has a dozen or so fountain pens inked at any one time, I find having a pen that will always work from the get go with no coaxing to be reassuring. This baby lives in my desk for a reason, whilst others may be exiled into storage due to having more picky characteristics. 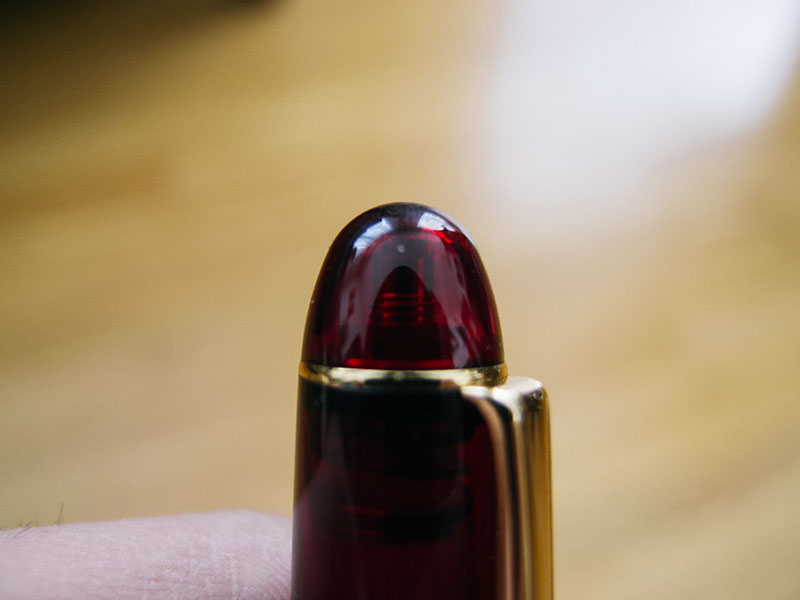 Now to discuss the meat of the knife. The nib is frankly exceptional. The Ultra Extra Fine is literally Ultra Extra Fine. I don’t know what the corresponding western equivalent is because as far as I know it doesn’t exists.

As you can see in the photograph below, the tip of the nib is basically sharpened to a needle point. Using it is quite an interesting experience, and I must admit that I initially did not like it. I found it to be quite dry and prone to snagging on paper which ruined the experience for me, but after consulting with pros (Leigh in particular), I found out I should be changing inks, and the results were spectacular.

So yes. This nib is very unique and will require some adjustment in terms of ink choice – I use the Pilot Blue-Black with it, and it flows wonderfully. I would suggest experimenting until you find a combination that works for you.

When you have a nib this fine, it’s always going to be a smidgen more problematic than a standard western medium. Every flaw and hiccup is glaring. This nib will reveal all to the naked eye with zero room for error. It isn’t forgiving in the slightest, but once you find your groove with the trifecta (nib, ink, and paper) optimal, it’s pretty damn wonderful. 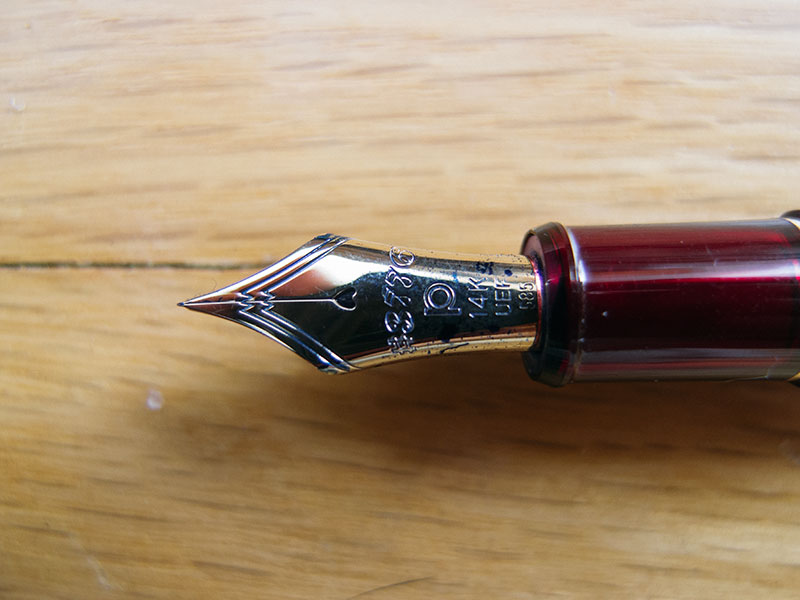 Getting us into paper choice, which is also interesting when it comes to this pen. Laid paper proved problematic due to the heavy texture snagging on the nib. Cheap paper was too fibrous. I found that the 90 g Clairefontaine vellum paper was very pleasant, Rhodia was also good, though to a lesser extent, and high quality Japanese paper from Tomoe River and Stalogy were pretty perfect. The nib is sharp enough to draw blood, and the pressure you put on it against paper will reflect that.

The nib width is 1/10th of a millimeter people! The tipping material is not rounded perfectly for your clumsy hands to wield haphazardly. As I mentioned before – making mistakes is very easy, and if you want a pen to scribble on printer paper, you will find the experience to be less than optimal.

Flex is basically non-existent. I am sure I could eke out some line variance, but the nib would go through the paper in the process taking into account how much pressure I would have to lay down. Technical writing (and drawing) as well as standard penmanship is what you will want to use this tool for. Its magic is its spiderweb-like line width, not its creative quirks or nib expression because, well… it has none. 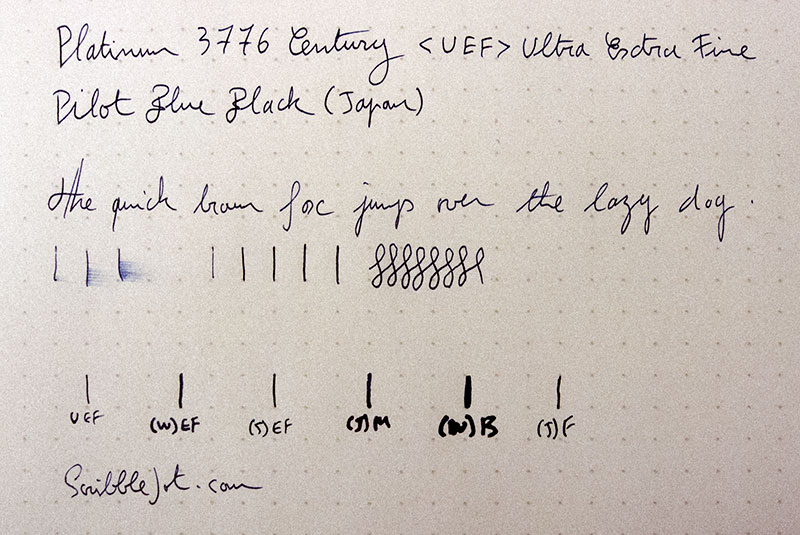 Discussing worth when it comes to niche items like fountain pens is always a tricky proposition. Some people find Nakayas “worth” it, and yet those same people would scoff at an embellished Danitrio. At the end of the day, this is about tines on paper, and what makes you as an individual happy. If you want an Ultra Extra Fine nib – you don’t have much choice. This Platinum is (as far as I know) the lowest entry point for such a crazy fine nib and for me it’s pretty perfect for jotting down my thoughts in an organized fashion. Do I wish we had UEF options at a low end price point? Yes, of course. But the nib is ground in such a way that I think mass production would be difficult whilst keeping consistency at a high level.

In short: pretty (but boring) pen with an exceptional nib (if you are into that sort of thing) at a reasonable price point (in my opinion). Lots of brackets and caveats, but then again, this is not something you pick up at your local stationary store on a whim.