Before I begin throwing shade at this pen, I want to scribble down a quickie disclaimer: I only have 2 Nemosine pens, both are awful, but that’s still a sample size of two. I sometimes Google other people’s reviews prior to writing my own, and in this case, I did read a few. My experiences with this pen run polar opposite to the conventional mainstream opinion, which is that the Nemosine Singularity is “cheap and cheerful with maybe a few quibbles.” Again, my opinion is the polar opposite. Take from that what you will.

Some of you may think I am overly critical after reading this review, but frankly, in this day and age of cheap, inexpensive pens I find my standards to be incredibly fair. I expect a working pen 100% of the time. I feel a lot of reviewers have a bias based on perceived performance – they own expensive pens (Visconti, Montblanc, etc.) and when they handle a cheap pen they are almost surprised when it works out of the box.

People, it’s a pen. Pens are not hard to mass produce consistently, ask Jinhao. So from my perspective, I view all pens as tools and ignore the price (up to a certain point) as at the very least they should lay down a nice line of ink without kicking up a fuss. That’s my stance on the matter, sorry not sorry. 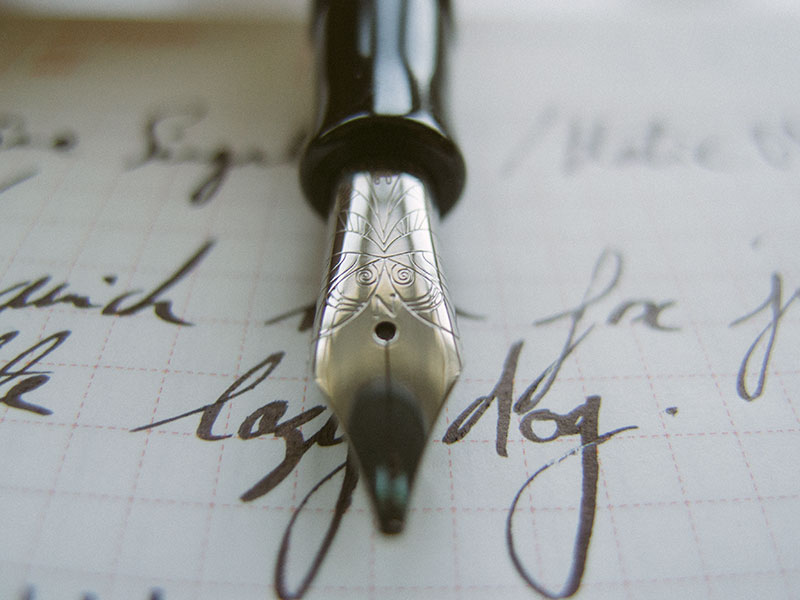 So what’s my beef with the Nemosine Singularity? It fails at its primary purpose (writing), the nib is ghastly (the stub that is, more on this later) – the design is patently badly engineered. The materials are sub par and the performance of this pen is laughable. I will expand on all these points, but for now, let’s break down whats in front of us. The Singularity is a cheap, plastic pen (in all the worst ways) that comes in a plethora of flavours, both opaque and transparent, with nice range of nibs (theoretically). Then again, the same could be said about any pen that uses standard drop in Bock nibs. Nothing special here.

I own the “Demonstrator” model with the stub 0.8 mm nib. I have owned it since it came out and used it maybe a dozen times. This is a pen I wanted it to like. It’s basically a Safari with a more interesting nib, and on paper, superior ergonomics (for me) due to its neutral grip section. Sadly, I only used it a dozen or so times because it’s frankly excruciating to write with.

The most self evident flaw of the Singularity, which you can spot without actually writing with it, is its material choice and construction. The plastic used is utter garbage, it cracks if you look at it the wrong way (see below) and feels flimsy and unsubstantial in a way that a Jinhao Safari knockoff never could, even at 1/10th of the price. We are talking shittier than Bic levels of construction and quality here. The only reason the Nemosine Singularity hasn’t committed Harakiri is due to its weakest points being reinforced with cheap metal bands. Literally the only reason its in one piece.

I own plenty of plastic pens. This is the first that felt unsubstantial to the point that I baby it.

Please note with regards to the crack – I have never carried this pen out with me; I have never dropped it or used it in a way that would be considered “abusive.” It’s just poorly made with terrible design and material choices.

At this point, dear reader, you may be sitting at home thinking that your Nemosine is perfect and doesn’t reflect my scathing review and while yes, this may be true, reality is subjective and I can only speak of what I experienced.

The sad reality is that Nemosine is not a pen manufacterer. They contracted a company in Taiwan to make a pen body- this pen body is piss poor in ever sense of the word. The nib, feed and housing is made by Bock. If the only thing that sucked was the nib (Bocks are usually good but you are always going to get a lemon once in a while) then I could forgive them. 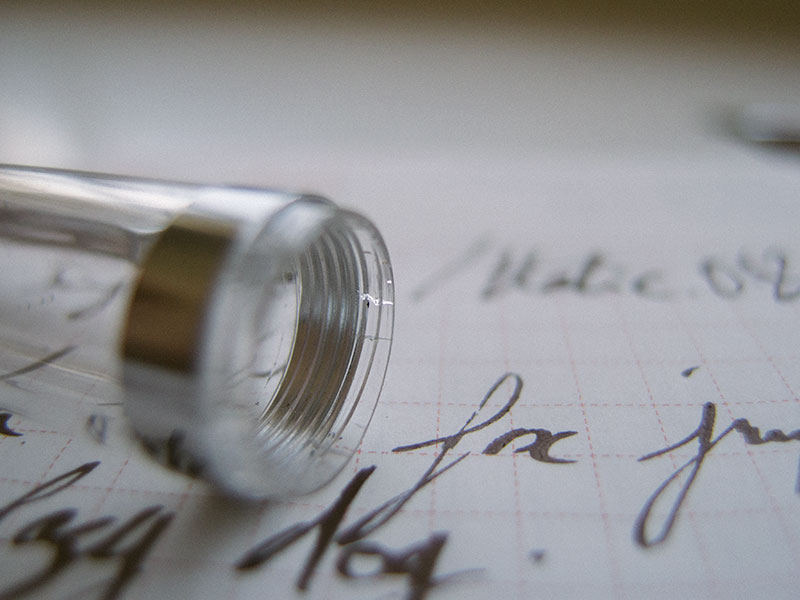 Right, so onto the the meat of the review: the nib.

It’s a 0.8 mm stub made by Bock with a very sexy design (one of the nicest engravings found on a modern nib in my opinion). Having a stub nib is pretty awesome because stubs are a rare find in the “entry level” fountain pen world. Rare as in basically never seen. $20 for a stub nib? Hell yes! Sadly the performance is dismal, the nib is scratchy, has abysmal ink flow and is generally repulsive to use. I actually flinch whenever I pick it up (ok, ok – slight exaggeration). This is sad because Bock has a pretty good rep but I think the core of the issue is that its very, very dry. I tried it with a bunch of inks and the result was sad in all cases.

I review out of the box performance, I have plenty of brass shims and micromesh but I think it isn’t fair to fix something and then review it as positive. I am sure I will be able to make this Bock Stub perform well with a smidgen of elbow grease but the fact of the matter is, I shouldn’t have to. 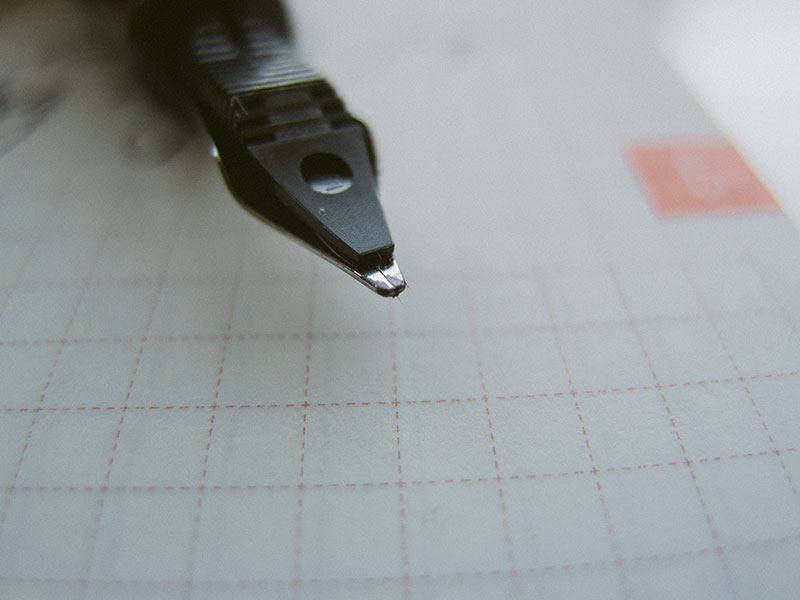 Writing with it is like fighting a battle that you know will be Pyrrhic. There are no winners here, just cramped fingers and anaemic scribbles on a page. The feed has to be primed before use. It dries out within 5 hrs and ink flow is sporadic. The scribbles you see below are the result of me mashing the cartridge until the feed was so saturated that it produced a decent trail of ink. 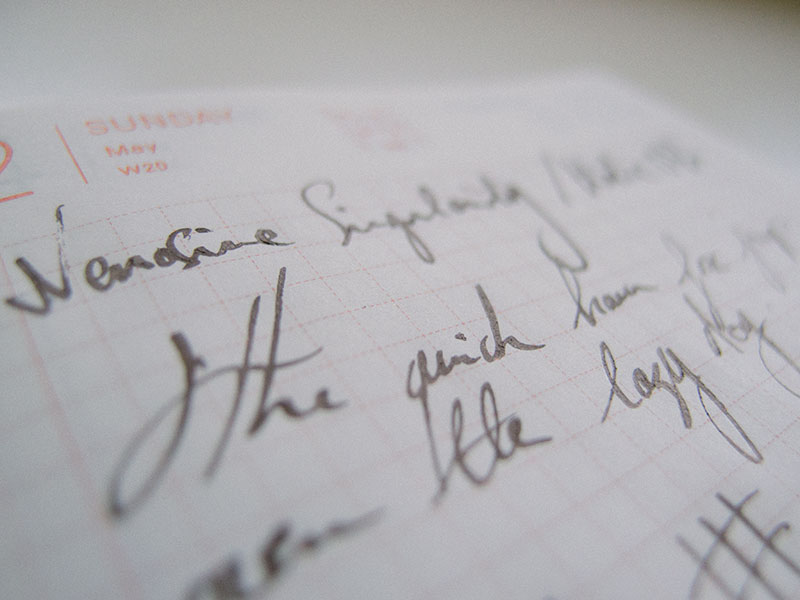 Even with that, the experience was miserable. I don’t want to fight with my nibs, but rather direct them, like a conductor; but with this – I can’t even.

The nib is pretty as hell though, so if you want a nice looking nib, I think it’s a solid choice. Especially for the price. 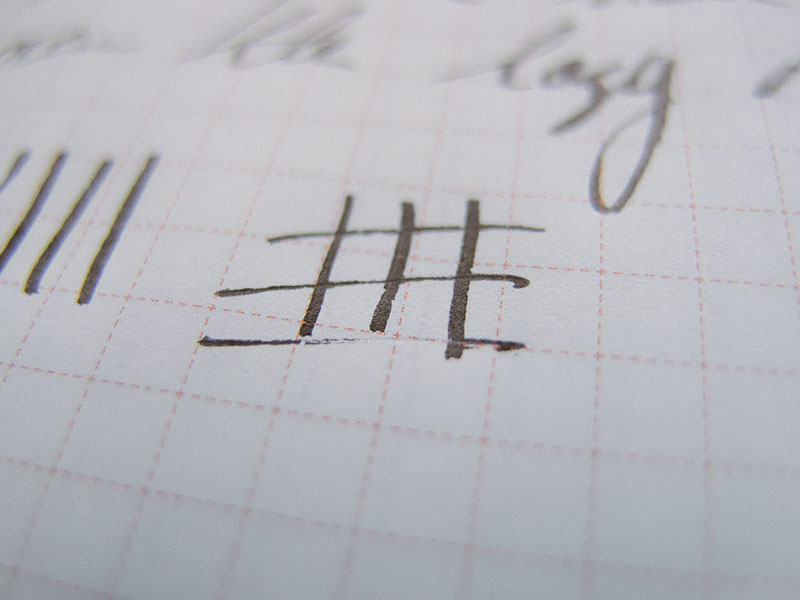 I will one day resign myself to modifying the feed and nib to produce something tolerable, but frankly, I shan’t do it happily. I expect my pens to work, all of my pens. I refuse to treat a pen as a DIY project out of the box. If I receive and it doesn’t work then tough love – it’s gonna get a bad review.

This is like buying a brand new car and it arriving with a dead engine. Aficionados may stand there and proclaim, “But of course, it’s a cheap car – you gotta have it serviced first, before you even think of using it!” but that’s a stupid argument. At the end of the day, when I purchase a tool (and a fountain pen is a tool) I expect the blasted thing to work. Especially when it’s not even made by Nemosine, but just ordered off the shelf from Bock. 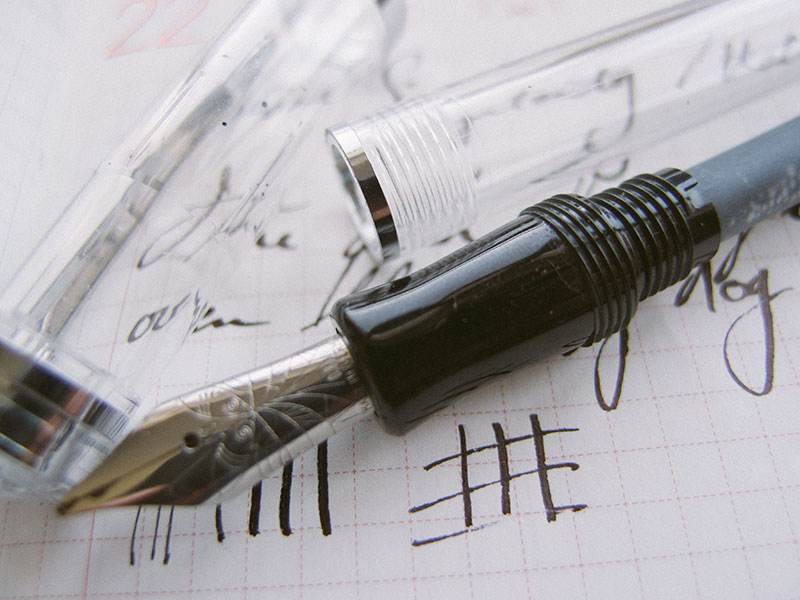 I never regurgitate dimensions or facts as you can just go to Amazon for that, but the Singularity is roughly the same size as a Lamy Safari (in the hand) and weighs absolutely nothing. Large (and pretty) #6 nib, but still the lightest pen I own. As a side note, due to the all plastic construction, I see no reason why you couldn’t convert it to an eyedropper if you don’t want to use cartridges or a converter, but frankly, why? What a waste of ink on such an unsatisfying pen. 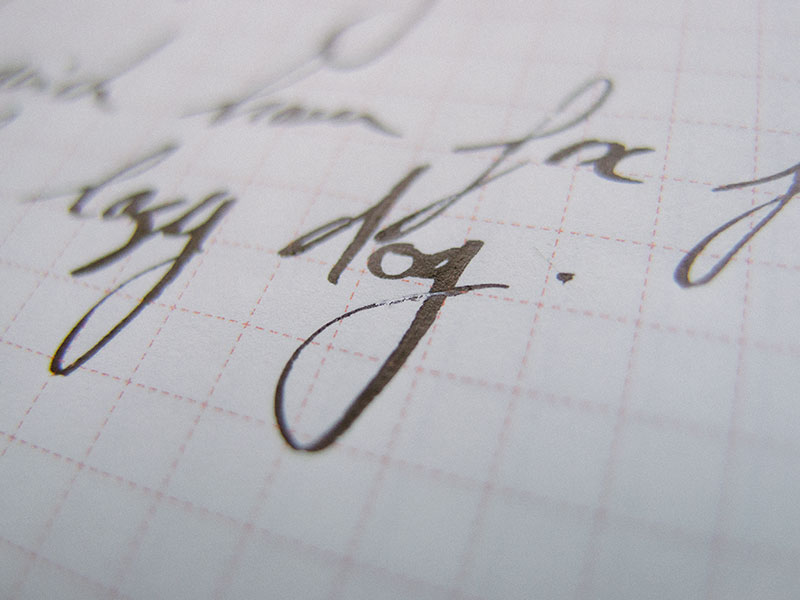 Here is the deal people: even if the Nemosine Singularity worked perfectly out of the box – it’s still crap. Mediocre construction, terrible materials, and uninspired design. That’s my real beef with it: when the materials suck and the construction is dismal, I have to question its place in the fountain pen tree of life.

For the money you can buy all sorts of interesting pens on eBay, and while $20 may have been cheap for a fountain pen 20 years ago, today you get a lot of nibbage for that.

People may argue that a Bock nib + section is expensive but I can buy one right now (at consumer pricing) for 10 bucks. So assuming Nemosine didn’t purchase wholsale (which they did) and that this pen wasn’t made with cheap materials (it was) and that it was made in the West with high labour costs (it wasn’t)- I am still overpaying for a garbage quality plastic sheath for a German pen. What the hell.

Price is no longer a pre-requisite of performance. All fountain pens should function perfectly (its 2017 goddamnit!) and if we decide to arbitrarily give “free passes” to companies for producing garbage when the competition is so extreme, then what the hell are we doing? Am I supposed to support this crappy pen because it’s from a smaller “manufacturer”? Here is a hint Nemosine – do better and maybe being “niche” won’t be your sole marketing point. For $3 I can buy a Jinhao 159 that has better fit and finish, better materials and better performance (my experience).

I am thoroughly disappointed in people giving a free pass to companies out of a sense of misguided “value.” Yeah, compared to a Sailor, it’s cheap, but that is no excuse in this day and age.

Avoid and buy something that works, or at the very least is worth the price of admission. This isn’t it.