When Noodler’s announced the Neponset to the world, the excitement was almost palpable. Could we really have a unique (and I mean, unique) flexible nib in a sexy body for an affordable price? Sadly, this pen come with a lot of caveats. but nonetheless it is very interesting, and I applaud Noodler’s for attempting something so ambitious; even if the end result falls a smidgen short of the mark.

Right off the bat, this is a large pen. The body is a nicely polished acrylic (in my case, I chose the Baikal blue), which lends itself easily on the eyes. It’s not the prettiest pen and after handling it you do distinctively understand that this is not a premium top shelf product, but superficially it is decently put together.

The biggest drawback for me is the acrylic that is used. It’s lackluster in its translucence and whilst it does capture the light nicely at certain angles, I do find the overall appearance to be on the cheap side. I am not sure why that is. The feel is very pleasant and I see no seams or manufacturing defects, but it’s almost cheap. I don’t say this as a criticism as this pen is indeed, in the lower price-bracket, but rather, that it has a certain cheap and cheerful quality to it.

The pen is remarkably light and comfortable. Nathan knows his stuff. It’s clear that this fountain pen was designed as a user – not a show piece. 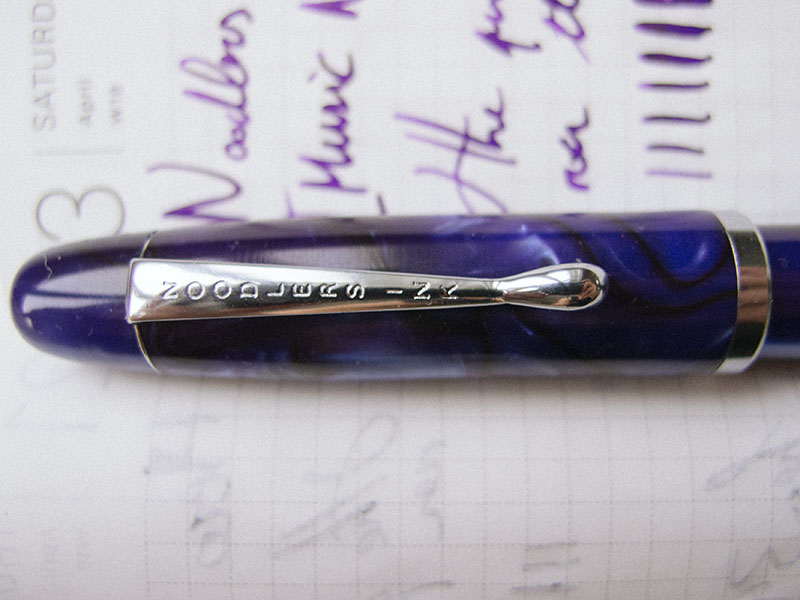 The clip of the Noodler’s Neponset is functional and looks better in the flesh than in photographs. Nonetheless, it’s not exactly pretty and I must admit the “NOODLER’S INK” embossing is not really my cup of tea. 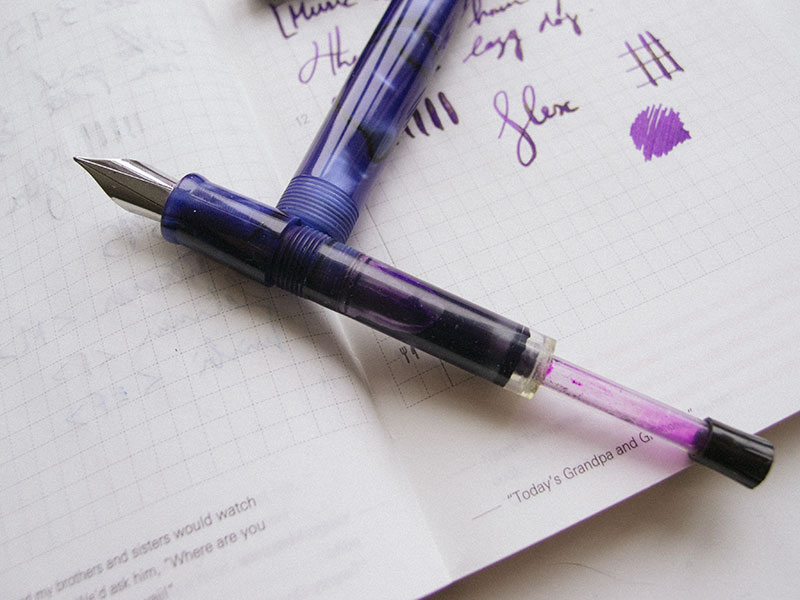 The section of the Noodler’s Neponset is fat and comfortable. The only manufacturing quibbles I came across (besides the nib, though more on this later) are with the threads. They appear nice and smooth, but screwing the body on and off is jarring – almost like the threads skip every so often. Not a big deal, as the cap screws on nicely, but it’s worth mentioning.

The filling mechanism as you can see above happens to be a piston converter… thingy. Technically, it’s part of the pen, but it also does screw off should you wish to use it as an eyedropper. The ink capacity is sizable, and as an eyedropper, it would be absolutely insane. If you find yourself having to refill often, this could be a good option. With that said, the nib and feed are quite thirsty. 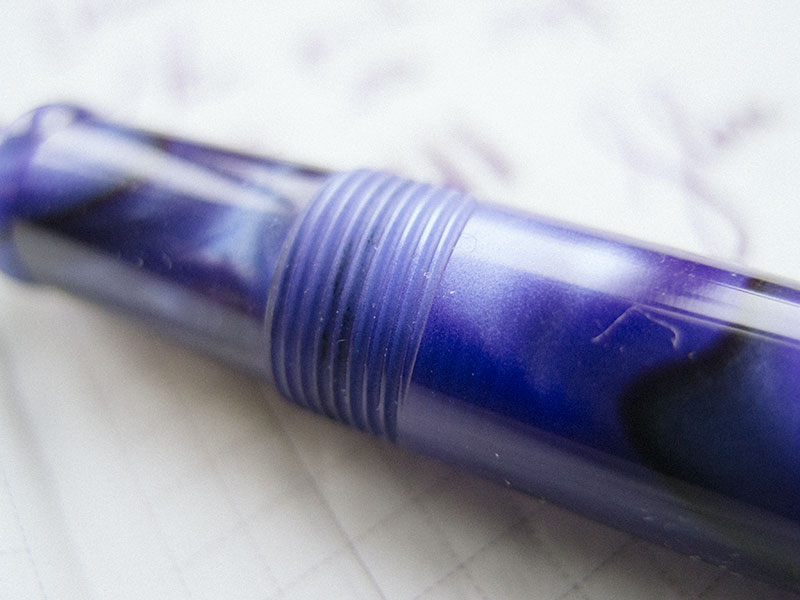 Writing with the Noodler’s Neponset is super pleasurable. The balance (unposted) is freaking perfect. I absolutely love pretty much everything about the way this weapon handles. Zero complaints here, 10/10. I am not surprised to be honest, as I also found my Ahab to be very comfortable so I pretty much expected this. 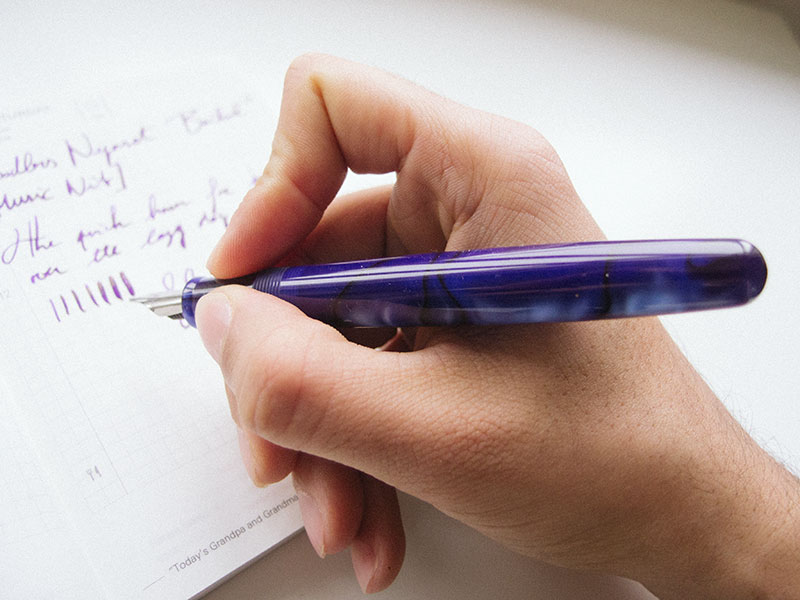 Posted, the pen is ridiculous. I don’t advise it, but it’s definitely possible to use this way… if you’re a masochist. 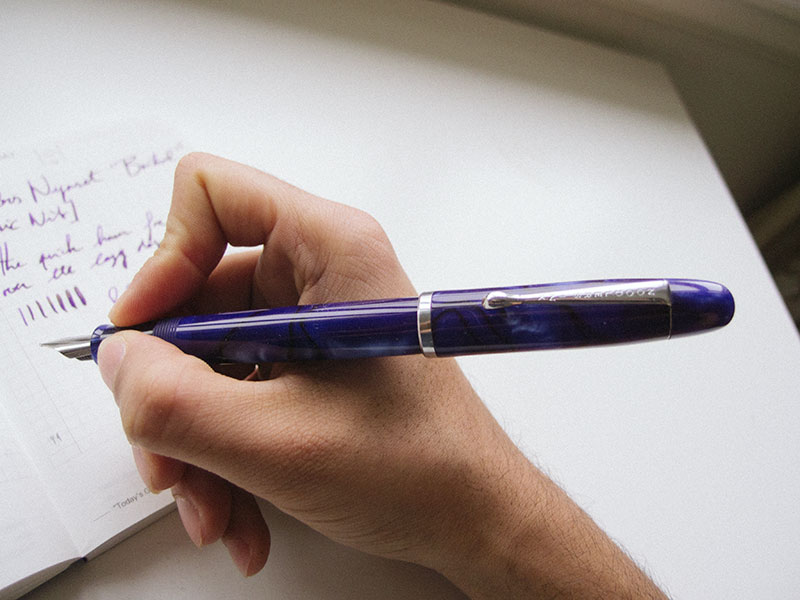 Right! Onto the meat of the review.

The nib of the Neponset is a 3 tine music nib which Noodler’s calls the “Vishnu Victory nib.” It looks awesome and I like the idea of 3 tines, especially if the feed can keep up, and in this case, it definitely can (handmade ebonite, very nice performance). Sadly, as you can see below, the tines seem almost squished and this produces an odd effect when gliding on paper. The feedback isn’t quite scratchy, but it’s not smooth either. It’s extremely disconcerting and frankly puts me off using the pen.

I theorize that it’s possibly due to the nib being too far recessed into the section, but this is how it came to me. With that said, Noodler’s are known to be a smidgen finicky, and some adjustment is often warranted. Besides the odd feedback, I found the nib to be reliable with no real issues. 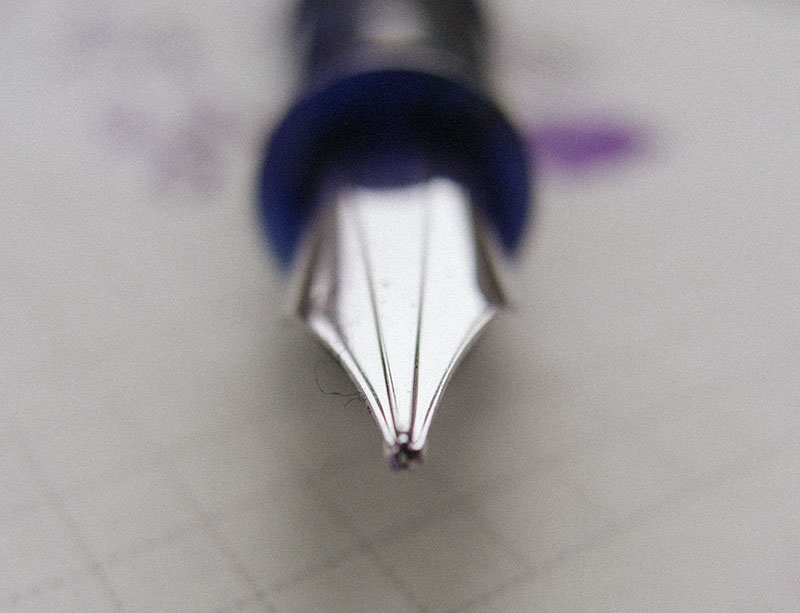 Writing with the Noodler’s Neponset is an interesting experience. I would say the line width goes from M to BB (Western), but the amount of pressure required to eke out some flex is beyond what I would be comfortable defining as a flex or even a soft nib. I would say that this is a stainless steel nib that happens to be remarkably sturdy and resilient to downward pressure, which allows you to eke out some flex. In practice, this makes calligraphy a pain in the ass if you like to add flourishes and have any experience with vintage nibs or even true semi-flex nibs like in the Namiki Falcon (soft). I am not saying that this pen can’t flex, but rather, that the nib itself isn’t flexible. It’s just very tough and the tines won’t spring outward like a mangled explosion of steel.

That’s my thought on the matter. You are welcome to disagree. I know these fountain pens have an almost cult following, but frankly, I prefer the Ahab as far as the nib goes.

Right, so the nib is a bit of a disappointment. However, the feed is bloody good. It not only keeps up a steady dollop of ink whenever required, but even goes beyond the call of service and gives you extra. If you like your scribbles to be rich and extremely saturated, this feed will oblige. I reckon it will rock with Noodler’s Apache Sunset or J. Herbin 1670.  The end results are quite lovely as you an see below. 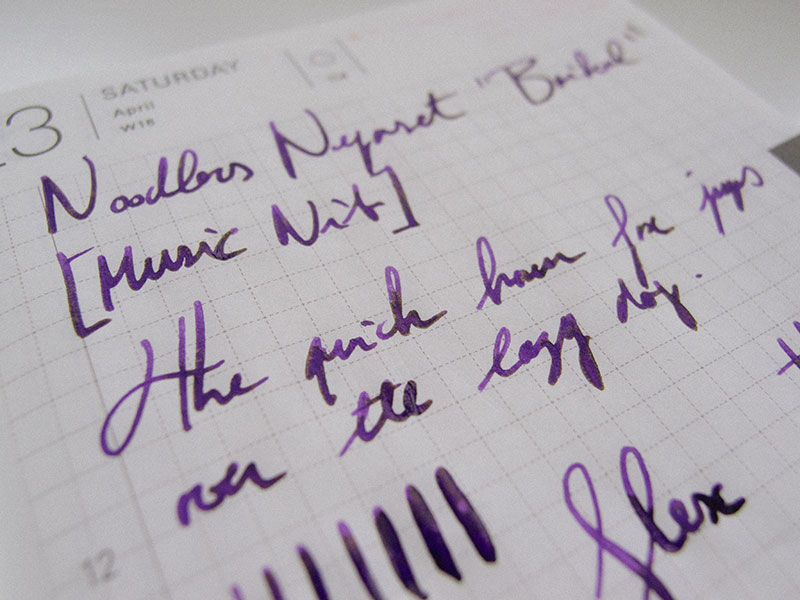 Wet. Wet. Wet.  I have yet to experience railroading and when we are talking about BB width, that’s pretty damn impressive.

The ink used happens to be Diamine’s Majestic Purple, and as usual I splurged the ink on the quite excellent Tomoe River paper from my Hobonichi Techo. 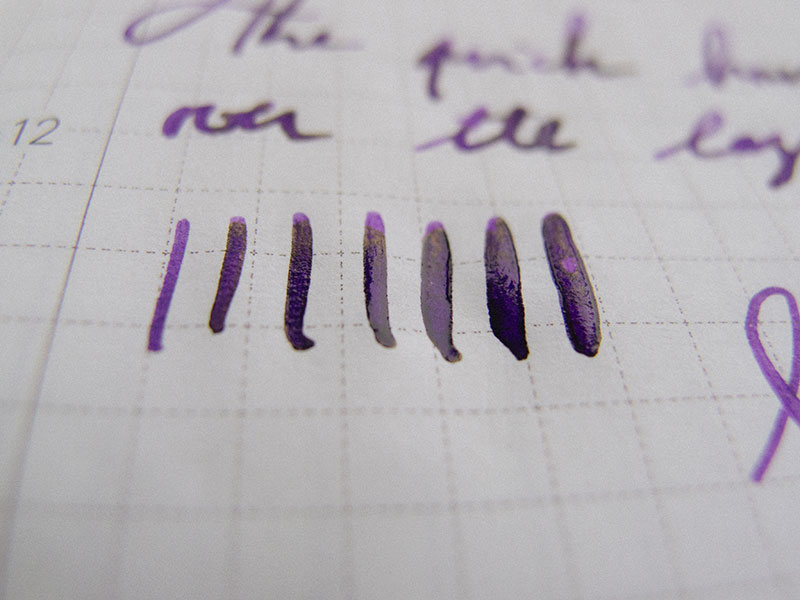 As I said earlier, the pressure you need to apply to eke out some flex is doable, but not pleasant. I wouldn’t recommend the Neponset as a daily writer, but if you want a pen for signatures, this might fit the ticket. 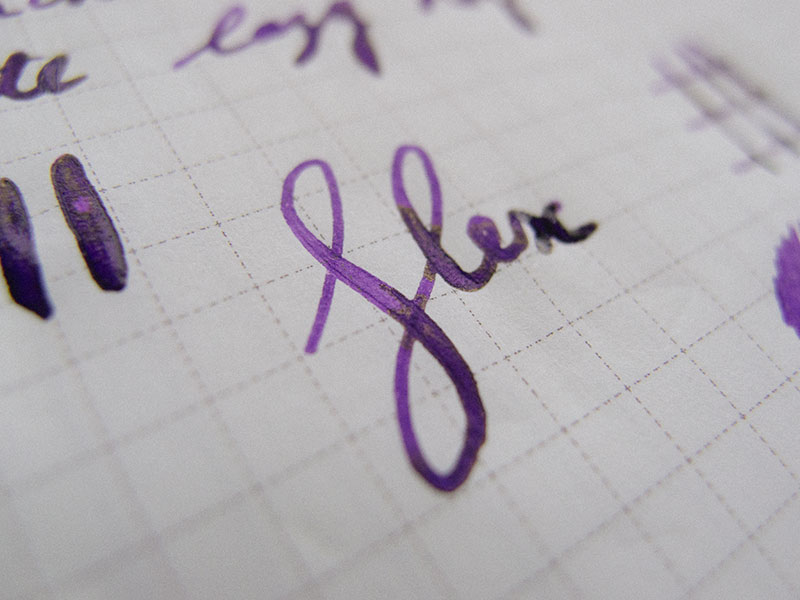 I imagine that at some point I will pull the Neponset out of the draw of unloved pens and fiddle with the nib to see if I can make it dance the way I want it to, but until that day, this pen shall remain unloved. 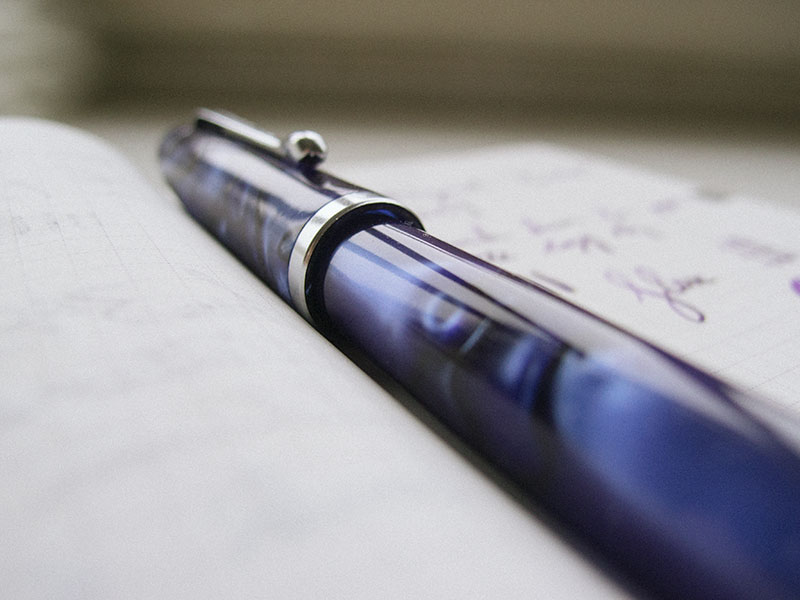 As I look at the photograph above with the Noodler’s Neponset looking particularly photogenic, I wish I had more to say about it. Perhaps a novelty feature or a great quirk, but sadly, it’s a large acrylic pen of decent quality (reflective of its price-point) with a sturdy nib that can be segued into squeezing out some flex, albeit uncomfortably.

Besides the feed, I am not particularly impressed and would suggest you take a gander at the Noodler’s Ahab instead, as I think it will serve you better as an everyday writer. In fact, I have barely used the Neponset beyond the first few days when I received it, and the days when I played with it to review, which is a damn shame, as it’s quite pretty in a what you see is what you get sorta way. 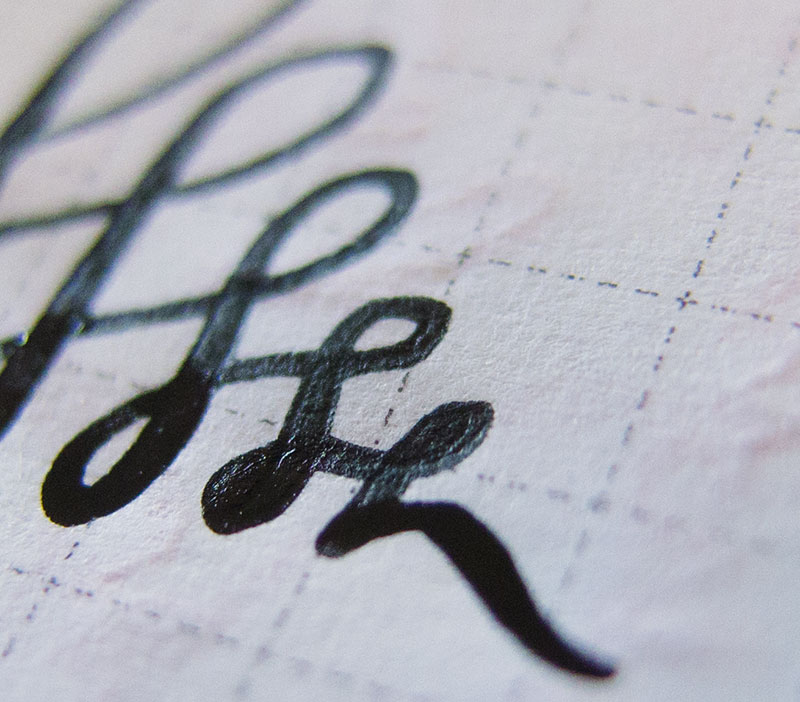