As best as I can tell, I am the first person to review the Stalogy 016 notebook. Of course Stalogy are quite famous (amongst certain circles) for their excellent 365 notebook/planners, but after I picked up the 365 I found myself perusing everything else Stalogy makes and came across this pretty oddling.

If I had to sum it up in one sentence, I think I would describe it as the cheapest notebook design with the best construction and materials used possible. It is super duper basic, but built so meticulously that I am utterly smitten.

As a side note in case you are curious, the cover is made of an interesting paper called “Gokanshi” and features a pleasant almost thatched texture that I haven’t really seen anywhere else. This sense of aesthetic perfection is representative of Japanese papercraft (generally) in my experience and I do really appreciate all these little details that serve limited purpose beyond aesthetic considerations.

On the face of it, besides the excellent paper (more on this later) what you see is what you get. The Stalogy 016 is a very simple, albeit odd, B5 Japanese sized notebook with zero features beyond light grey 7 mm ruling. No elastic clasp or frills of any kind. Not even a pocket at the back (thank the gods).

In a lot of ways, you could say this is a Moleskine Volant on steroids. 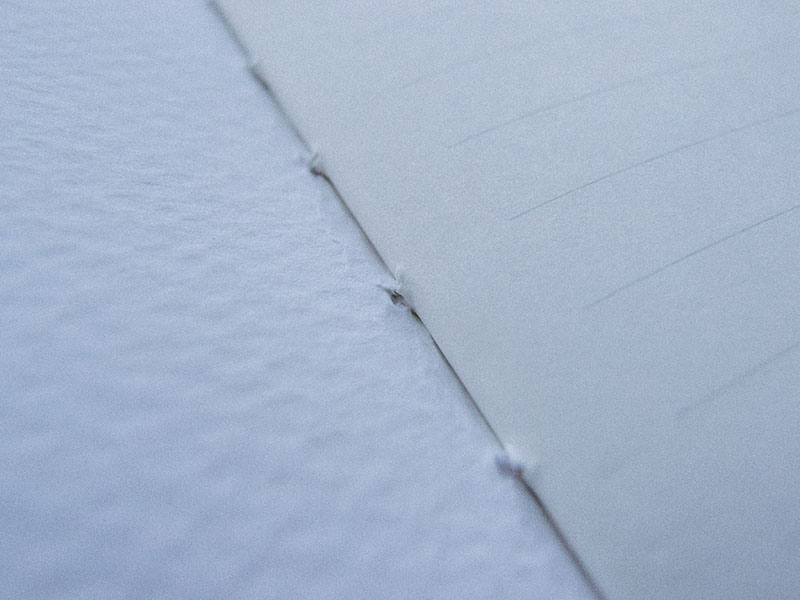 Stalogy opted for thread binding as opposed to staples which was an excellent choice. They also reinforced the spine with a pretty embossed cloth strip. In terms of durability and potential “flatness” status, I think this is probably the best option for fountain pen friendly paper at a reasonable cost. It’s a solid improvement over the Clairefontaine options in terms of feel (subjective, I know) and objectively, much nicer to look at. The Japanese have beautiful design and clean typography down to a fine art.

The size, as I mentioned before, is 179 x 252 mm / B5, which is odd as it fits between the A5 and A4 standards we are used to here in the West. Practically speaking, I think it’s an excellent size for jotting down your thoughts whilst maintaining portability for when you are on the move. 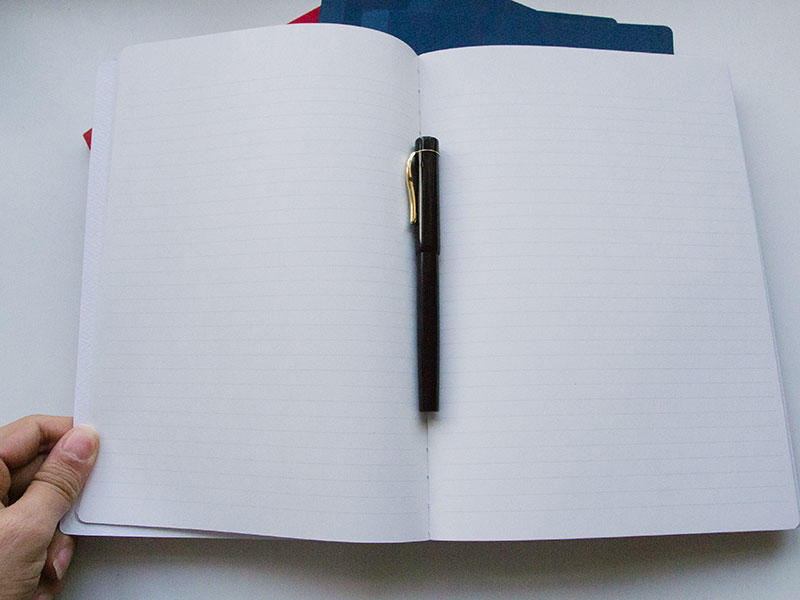 Sadly, whilst the Stalogy 365 notebook is thankfully bereft of wasted space, I cannot say the same about the 016. A giant 3 cm whitespace on the top – why? Really.

I have always liked Leutchturm for using all paper to its max potential, and I find it quite jarring when I am confronted with such stupidity. First world problems, I know.

The paper used is 81.4 g which is significantly heavier than the featherweight stuff used in the 365 or anything by Tomoe River. The texture is reminiscent of Clairefontaine’s “Triomphe” vellum stuff with a similar almost “glossy” feel. Obviously, it’s not glossy, but the Stalogy 016’s smoothness and distinct lustre is quite something and far removed from anything you can pick up in a supermarket unless you are lucky enough to reside in France or Japan. 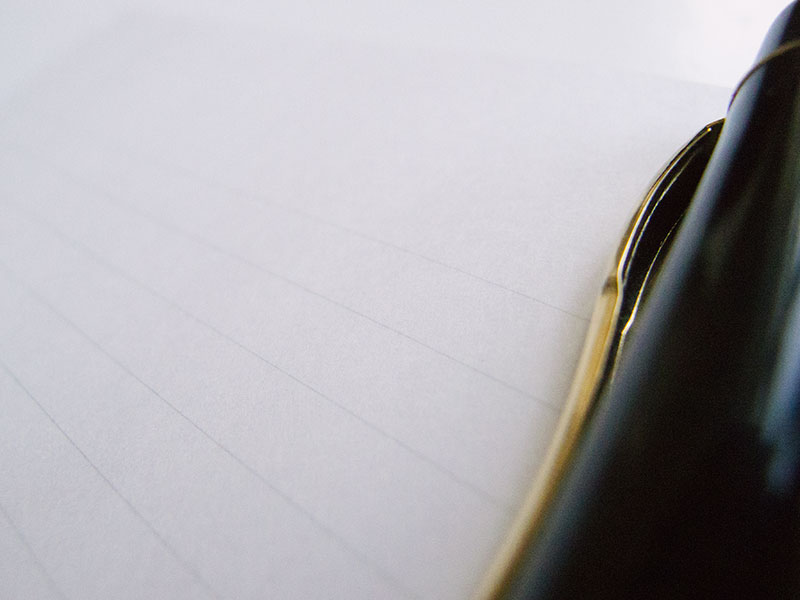 Its performance is literally perfect. All stationary mediums and nib widths skate on it like it was polished ice. Zero complaints, regardless of how wet your weapon of choice is. I would imagine it wouldn’t handle watercolour with quite the same aplomb as Tomoe River paper (which tends to puddle yet not break), but I could be wrong and might test this in the future. With that said, even my water fountain’esque vintage Sheaffer with its juicy italic did not result in any feathering or bleedthrough. 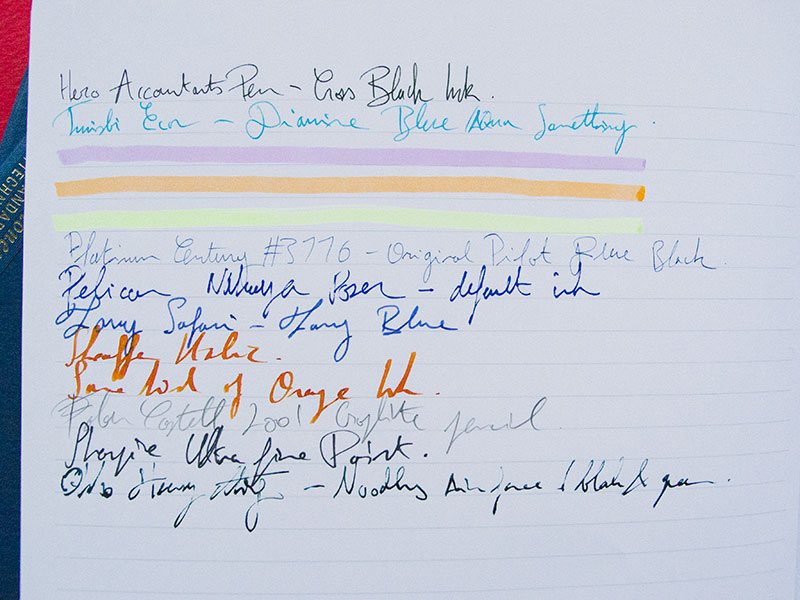 As you can see, the only (minimal) bleedthrough is with the Sharpie, as you would expect. Some light ghosting is apparent too, although I will say that this is more evident in photographs than in the flesh. From a practical standpoint, I reckon it’s viable regardless of medium as long as you don’t take the piss (Sumi ink and a 2 cm paintbrush being a terrible idea, for example). 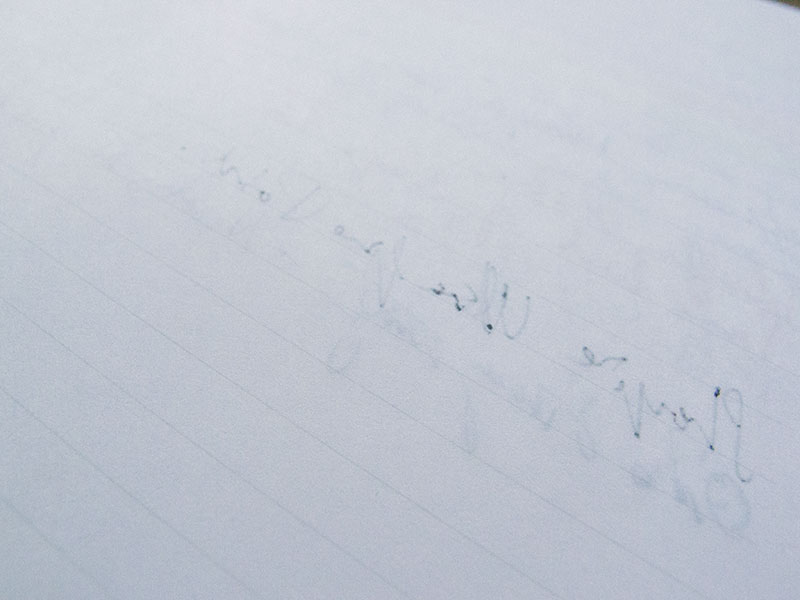 Much like Hobonichi & other niche Japanese papetrie manufacturers, attention to detail is exquisite. This is a relatively inexpensive notebook and yet everything is stamped deeply with lovely rich gold embossing and multiple textures utilized for maximum tactile delight. If you are reading this, then you know that performance isn’t everything, otherwise we would throw out our super expensive fountain pens and stick to Pilot G2‘s.

A pretty slab of paper makes you want to write pretty things. That at least has been my experience and what I tell myself whenever I checkout. 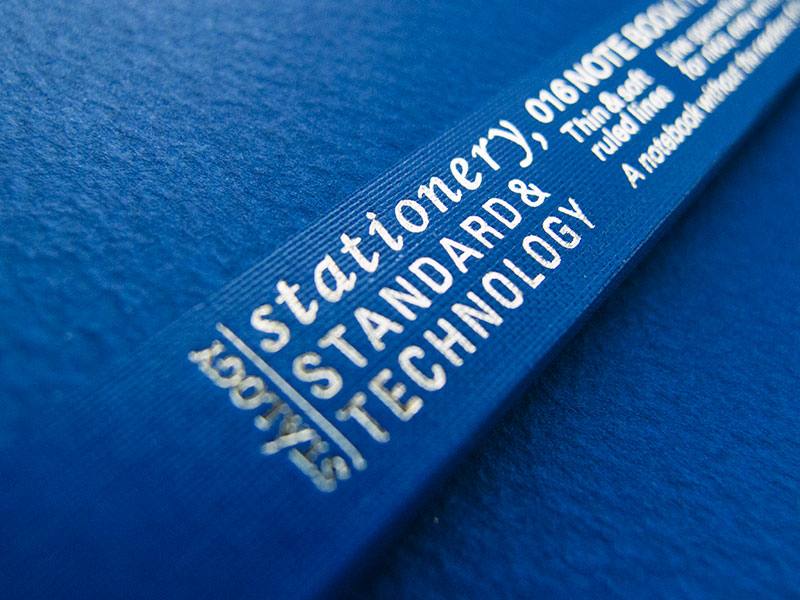 Right! So the Stalogy 016 has perfect paper, great congruent design with no shortcuts or manufacturing defects – makes this puppy an easy recommendation!

Sadly, however, this is not the easiest notebook to get your mitts on (at the right price). Amazon doesn’t sell it as do few vendors (OmoiOnline being an exception). No one seems to want to keep it in stock. I bought a bunch off a UK seller (no longer exists) for £2.50 a piece, which I think we can all agree is a bargain, but for now I would hunt eBay or contact more niche stores for them to stock it, which may be a losing battle. When it comes to Japanese stationary (and Stalogy in particular) it seems stores prefer to cater to the high end/more polished notebook crowd who would jump to the Stalogy 365/018 instead, and I get that, as it’s a fantastic notebook in its own right.

Just glad I nabbed a supply of these whilst I still could!