De La Rue is a legendary British (former) manufacturer of ink dispensing tools, famed for its Onoto (the original plunger-filler). It’s a pretty damn common sight amongst various auction sites and thrift stores in the UK. I purchased “The Koala Pen” in pretty shoddy condition and fully serviced it, so bare that in mind with this review. As with all vintage pens, buyer beware. Condition may or may not be within the scope of repair and my experiences may or may not mirror your own.

With that caveat out of the way, let’s take a gander at this pen from this interesting company! 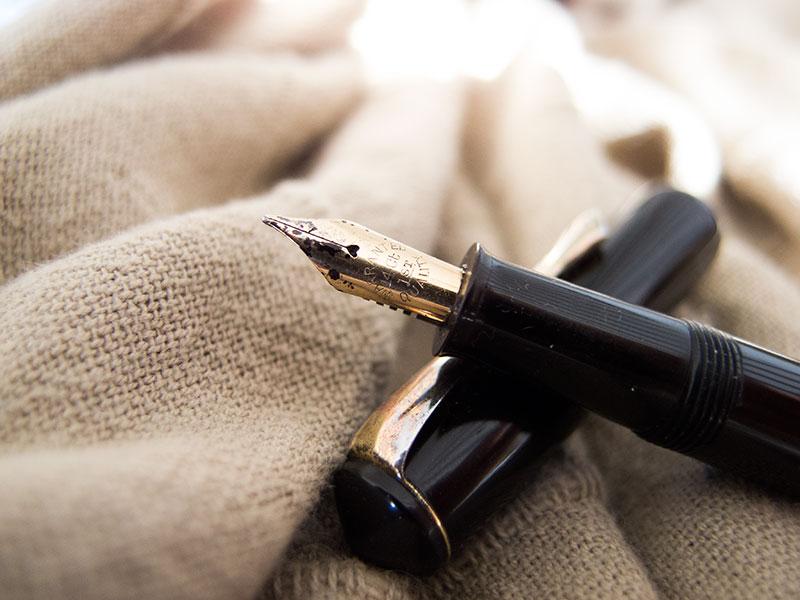 I should mention that I primarily like “weird” vintage pens. My current everyday writer is a Sheaffer made in Japan by Sailor. If it’s quirky, I’ll probably be interested. From a collect-ability perspective it’s clear that Conway Stewart Dinky‘s and Waterman 5X pens dominate the market, but for me, I prefer nibs with almost no presence online, and “The Koala Pen” is a pretty good representative of that bias.

I have yet to find any review of this pen, and frankly it seems to have been forgotten by history. Outwardly, it’s a standard plastic body/rubber grip section lever filler with a 14 K warranted gold nib. As was common of the time – nothing about it really stands out. The only bits of information I have managed to dig up is that it’s theorized that it was made for the Australian market and surfaced around the late 50’s. Besides that, I know very little about the pen besides the fact you most likely cannot get your hands on one. By that time Onoto/De La Rue was in decline and consequently, it wasn’t produced in particularly high numbers. 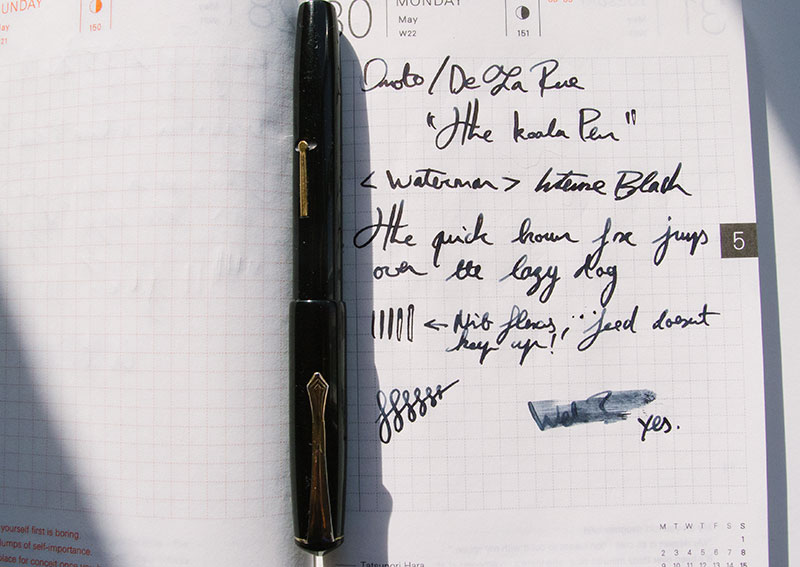 The plastic itself is of decent quality, significantly better than the Parker Victory‘s of that same period, and despite its original condition being pretty piss poor, I was able to clean up all scratches very easily.

I should note that I am a purist when it comes to fountain pen restoration. I do not go to extremes to remove age, as you can see from the clip! I much prefer to clean it up and fix the internals using the original materials (rubber instead of silicone and shellac instead of glue). It’s just pleasant to scribble with something over 70 years old that functions as new but with a touch of weathered nostalgia around its various components. 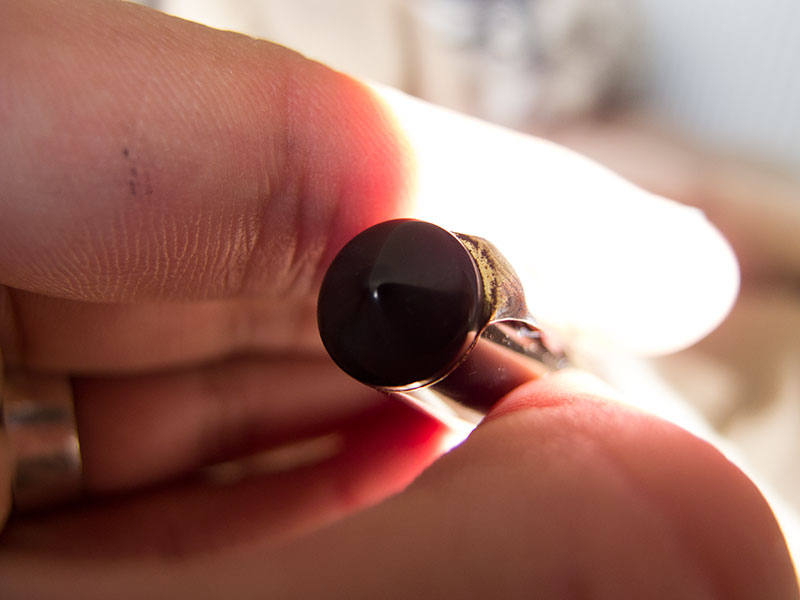 Speaking of components, the lever and bar are original. I had to add a smidgen of extra torque so that the lever would “snap” to position like intended and naturally the original sac was utterly petrified and had to be replaced. Beyond that, all changes were cosmetic in nature, and all I had to do was spend a few hours gently buffing and polishing. 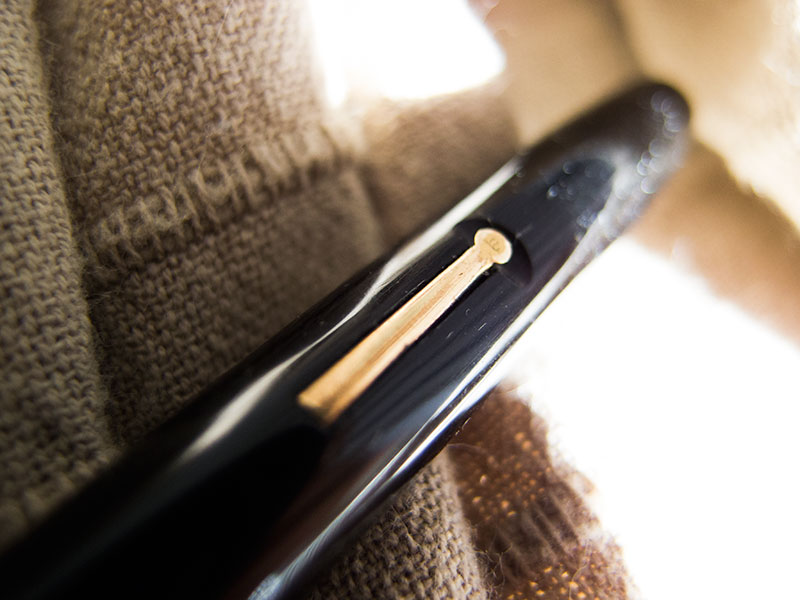 No marks or branding beyond “The Koala Pen” on the side. If I had to guess, this would have been an entry level pen and not a luxury tool. It does look like some branding was on the lever on the end, but upon further investigation with a loupe, I reckon it’s just 3 scratches. 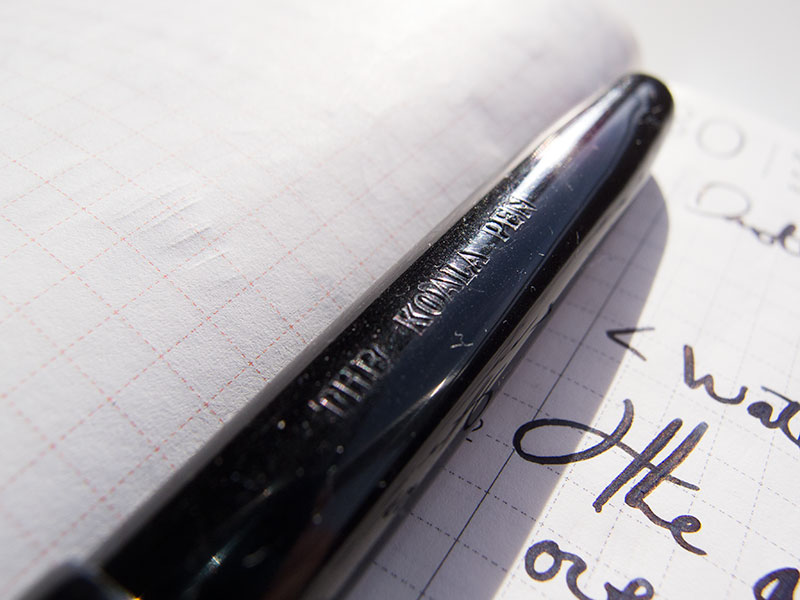 The clip was badly tarnished. Took quite a bit of time to clean up and admittedly I was tempted to buff it to a mirror finish. If this was a Conway Stewart I would have probably done so, as flipping it in “pristine condition” fetches a pretty penny on eBay, but as this is an oddball rarity, I sided with my own personal feelings and maintained the “original character” if you catch my drift. 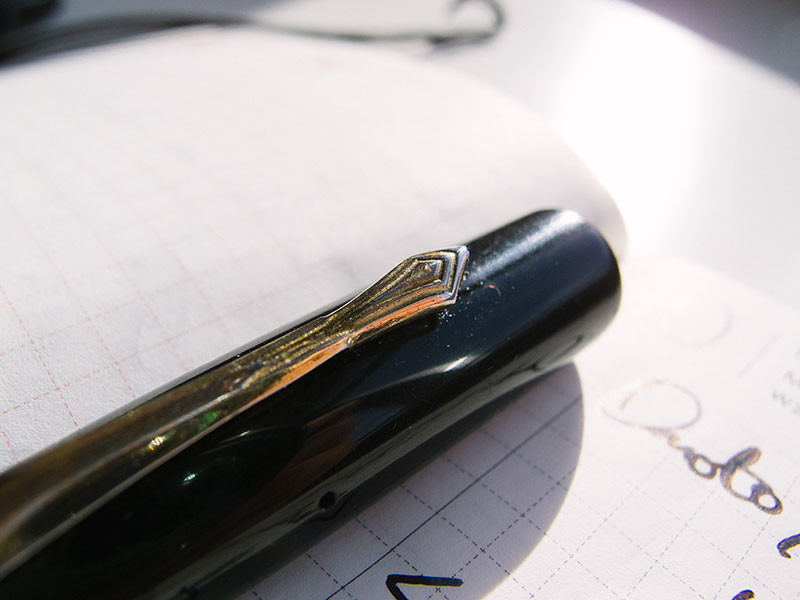 As for the nib, it’s got plenty of character. The section is friction fit (zero threading) and it did take me a long while to manage to disassemble this puppy, but honestly, it’s a pretty nice scribbler, despite its rather pedestrian appearance. 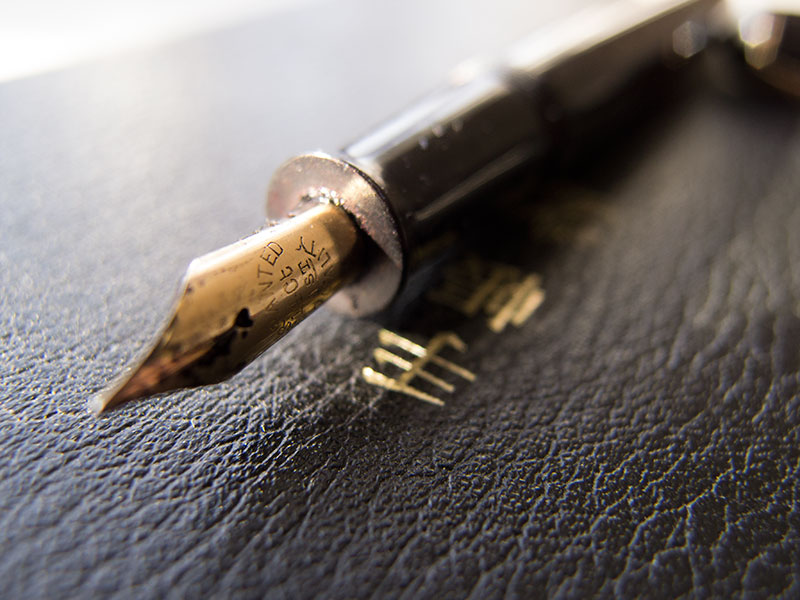 When people ask for pen recommendations, it’s only a matter of time until an inky aficionado suggests going vintage, and sure, on the surface it makes perfect sense. Gold nib, interesting filling mechanism, all under £100? Sign me up! But the reality is that the filling mechanism, whilst perfectly functional, is a touch finicky and the nib has character, but some might say too much.

I shouldn’t forget to mention that vintage pens are traditionally much smaller. I personally have zero issues with it, but that’s me. It’s light in the hand and the expressiveness of the nib makes me forget that I am holding what would be defined by marketing professionals in this day and age a “ladies pen.” It’s petite for sure, but not unworkable. 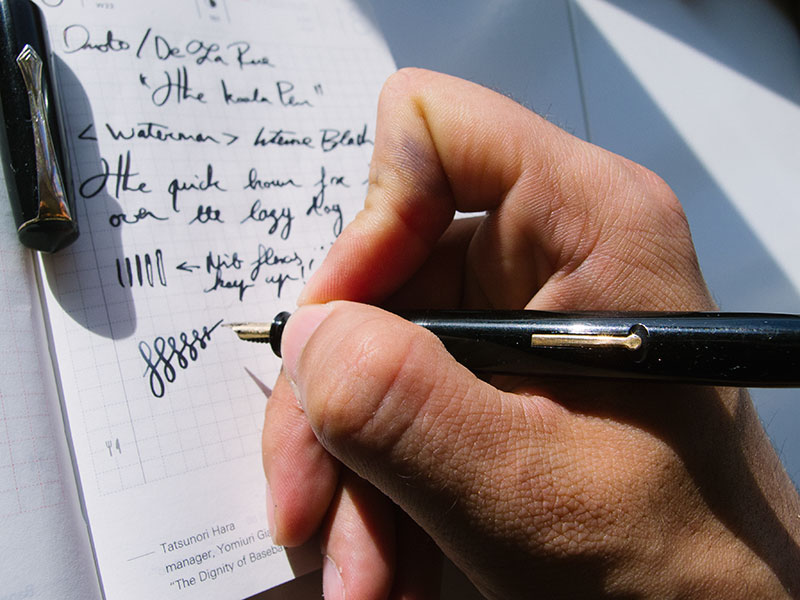 Right, so the nib. As you know I am pretty strict about how I define flex. The Koala Pen to me has a semi-flex nib, but then again people refer to Noodler pens as flexible, and they are merely soft in comparison to this Onoto. The feed does struggle to keep up if all you want to do is crank out some BBB lines, but for day to day cursive, it’s quite wet and has zero issues. Railroading only appears if you try to take the piss, basically.

With this pen, it’s not the nib that struggles, but the feed. I know I could easily modify it to be super wet, and in the future I may do so, which in turn would make it a great almost full flex pen, but for the sake of this review, it’s a semi-flex (“out of the box,” so to speak). 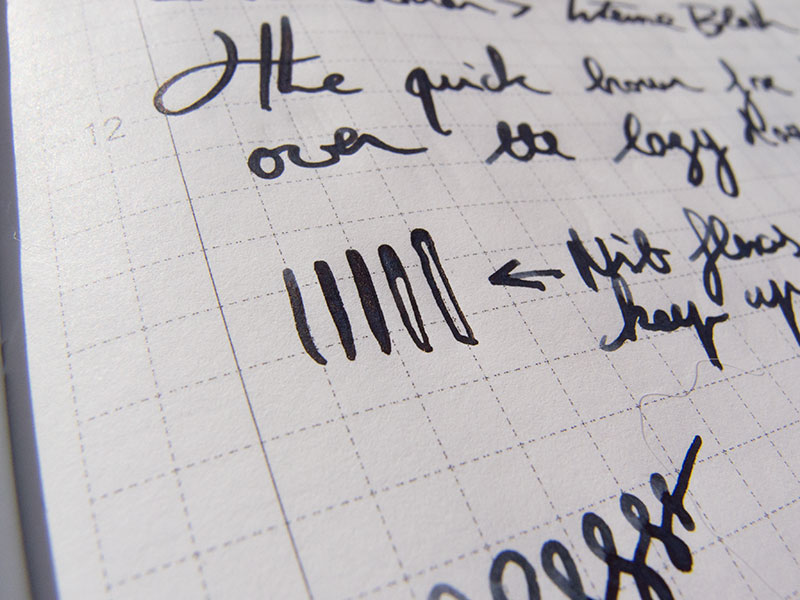 The feedback is both pronounced and extremely soft at the same time. I would imagine that if this was a dryer pen, it would catch a lot more on the paper, but due to how much ink it cranks out, it’s very smooth in that distinctive “vintage” sorta way. Very similar to a Waterman 52 nib in my opinion (as far as the feel goes).

Discoloration like what you can see below on the clip is why I tend to avoid “going crazy” with the buffing. Very pretty. I must admit that I bought this pen out of curiosity (never seen it before), but I have a feeling it may stay in my collection. 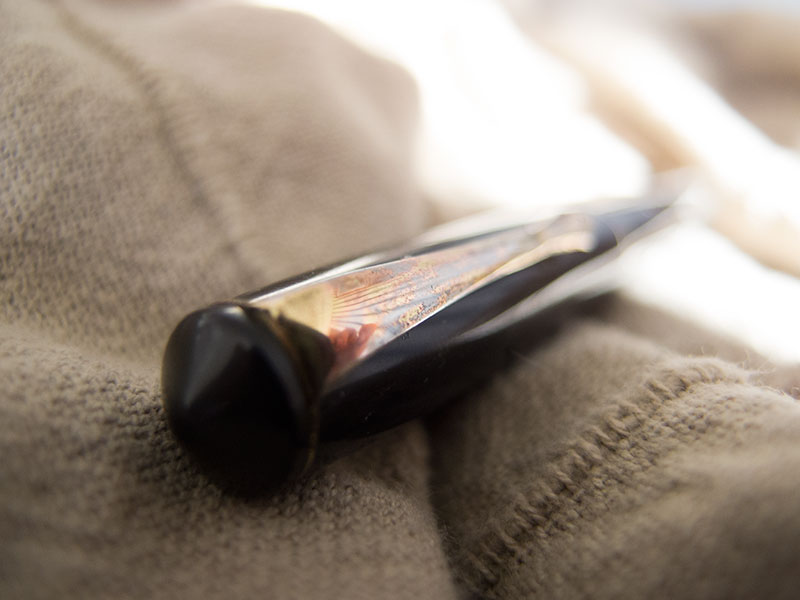 Like all vintage pens, the value is heavily dependent on mainstream appeal and condition. This particular pen is extremely rare, and yet because it’s not really collectible, you could possibly find one in “acceptable” condition for £50-100. It’s extremely odd to me as Conway Stewart Dinky‘s are a dime a dozen and yet commend stratospheric prices on the secondary market.

So, as a user – it’s pretty freaking awesome, and admittedly, I like writing with something no one else is writing with. It stands to reason that if I whip this pen out right now and scribble, it’s likely that I am the only person currently writing with this model – in the world. You can’t say that with any degree of certainty about vintage Watermans and Conway Stewarts, which lends me to be a smidgen snobby about them.

If you can snap one up (or even find one… good luck with that!) then it’s a great deal as the price will be severely under valued in my opinion. The mechanism is very resilient and the nib has gobs of character. Can’t ask for more than that at the end of the day.