I have decided to do a quickie update on my Nemosine Singularity review to clarify my feelings (or lack thereof) on a fountain pen that is (seemingly) adored. The crux of the issue for me is this narrative that the Singularity is first and foremost a solid pen. On a practical level, the construction is shoddy and the nib (out of the box) was utter crap. This, as a baseline, guarantees a negative review from me.

There is an almost perverse school of thought in the fountain pen community whereby we absolve whatever garbage a company produces as long as we perceive them as the underdog. Imagine the sheer amount of salt there would be on the forums if Lamy had been the one to come out with this pen.

In short; If it’s niche, then it’s okay if it needs to be “tweaked” (read: repaired) for it to work.

This is actually insane. I get that fountain pens are fringe products and thus emotions play a larger role than, say, when shopping for a garden hose, but at the end of the day (as I stated in my initial review) a pen is ultimately a tool. If the tool doesn’t work, or rather, works in a sub par fashion, then I have no obligation to forgive its faults.

But whats utterly crazy about the Nemosine fan group is that Nemosine is not a pen manufacturer – they are at best a pen assembler with nifty marketing. 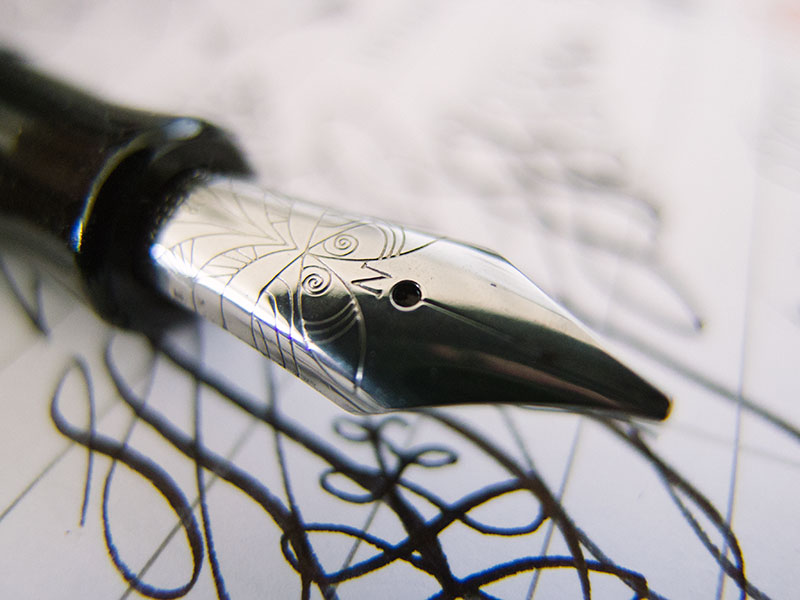 Take for instance their about page;

“Every Nemosine pen is manufactured with a symphony of global craftsmen lending their talents. With a pen maker’s steady hand, an artisan’s eye, and a meticulous attention to detail.”

Translation: Nemosine contracts an Asian company to mass produce its bodies and throws a nib from Bock in the mix whilst gouging the customer under this bizarre notion that they actually create anything. Spoiler alert; they don’t. 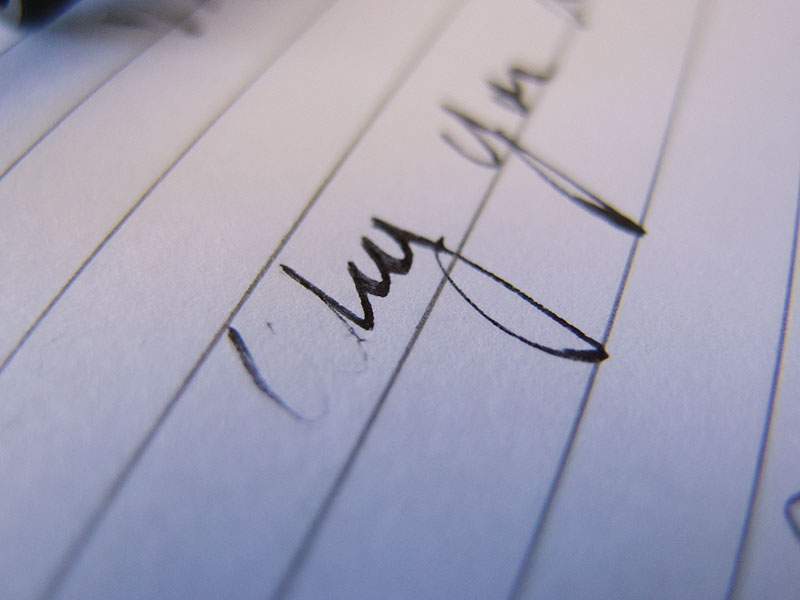 The sad thing is, I actually like some Nemosine Pens; in particular, the Fission, which is a great looking slab of brass and unlike the Singularity, has the twist “drop in” Bock nib sections which makes it a very versatile platform. I own the baby blue model and it performs decently with above average construction and materials. It’s still not a perfect pen and has quite few flaws, but at the very least it is a unique design with a nib platform that, despite being off the shelf, provides some distinct advantages due to variety of options and ease of change. 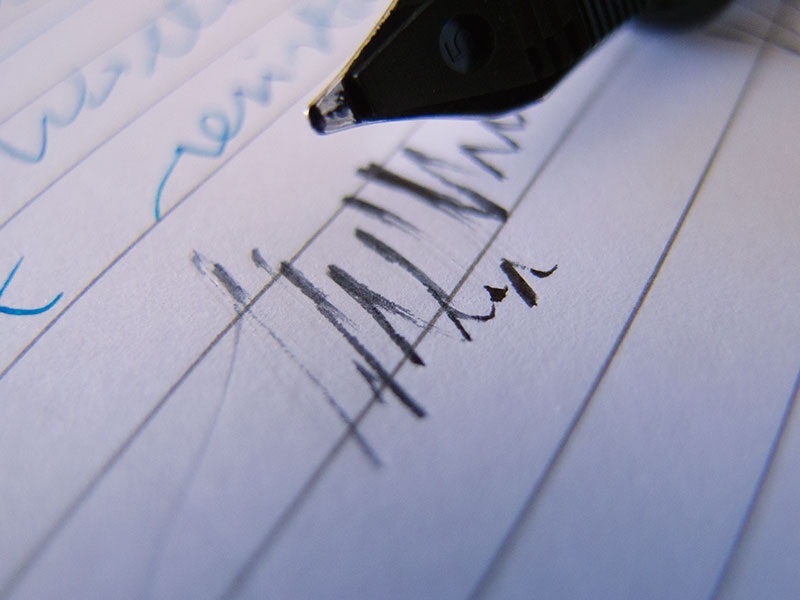 The Nemosine Singularity on the other hand does not have the drop in Bock nib units. Instead you have the cheaper friction fit stuff that in theory works fine, but in my example was badly fitted and the feed barely kept up with the nib. This is the perfect example of a marketing team thinking “should we offer a 0.8 mm stub nib?” without actually doing some serious research on the feed and its ability to keep up.

Admittedly, it is possible that I was cursed by the gods and I have the only Nemosine Singularity with a sub par feed, bad fit, and a shit nib, but I can only judge by what I have.

In any case, I ripped the feed and nib out to see what’s under the hood. I am no stranger to DIY-ing pens, so it’s not a big deal, but my core issue is that I shouldn’t have to for the pen to function in the first place.

I digress. I worked for 10 minutes on the nib with a combination of brass shims and pressure on the tines to increase ink flow. Not a hard task (eventually I will scribble an article on the matter).

End result below, the Nemosine is definitely wetter than before and actually functions as a pen, but sadly the nib is still crap. On the left I have a proper italic nib from Sheaffer USA (their No Nonsense fountain pen) and it’s ridiculously smooth with potent ink flow – the Bock nib on the Singularity by comparison is scratchy and generally unpleasant to work with. 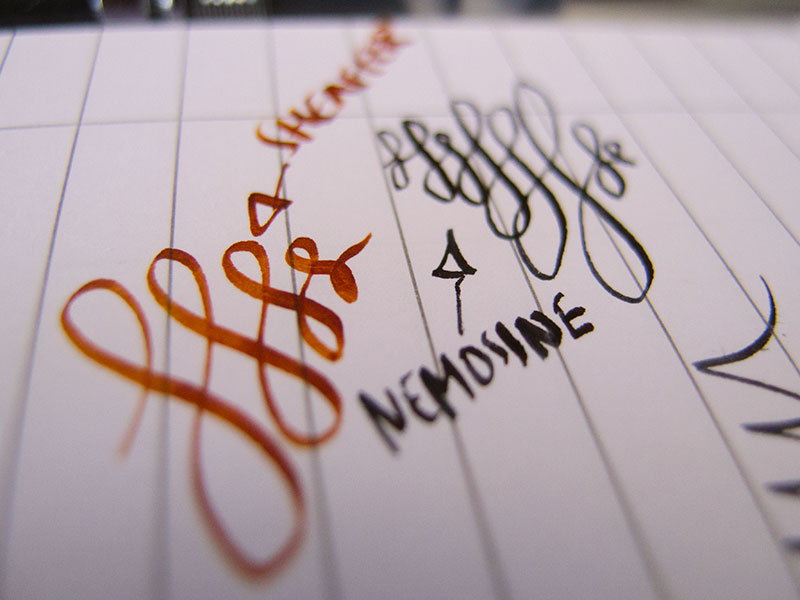 The crazy thing about this, is that stub nibs are designed to be “easier”/more forgiving italics. In essence, you take an italic and you round and smooth out all the hard edges.

I own a handful of italic pens and this Nemosine 0.8 mm stub is the worst feeling and performing of the lot.

Weirdly, under magnification I see no reason why that would be the case. The tines are aligned, the tip seems polished enough, and I see zero manufacturing defects. Which leaves me at a loss with regards to how to explain this nonsense. 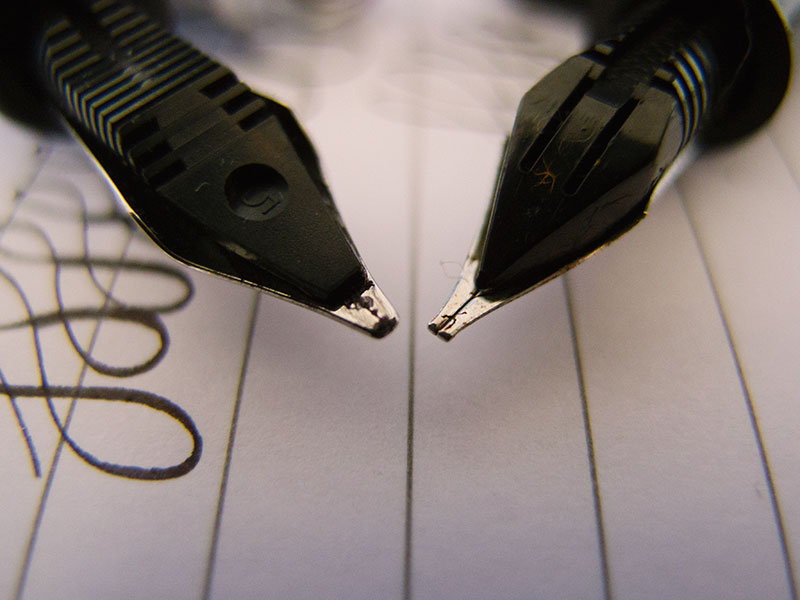 I have no explanations so I must default to the nib simply being bad as well as having a sub par feed as a lover. It’s a pity. 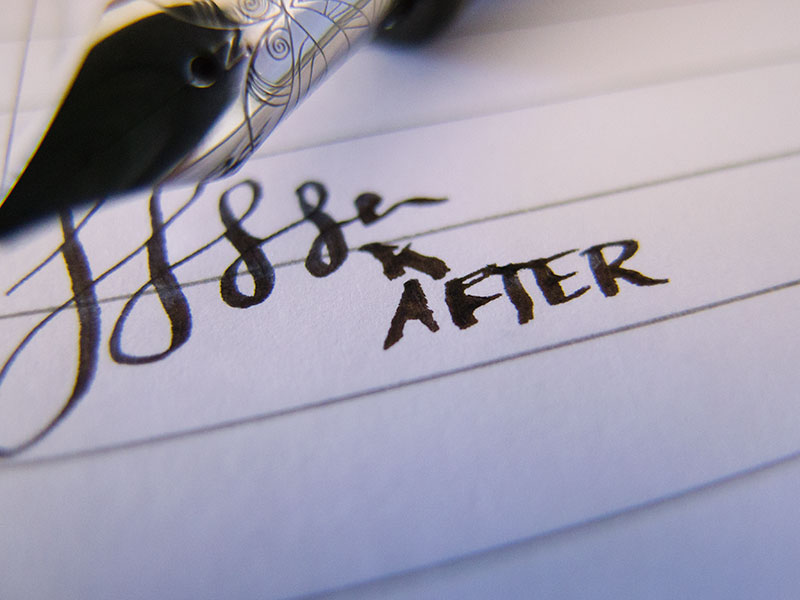 However, nib issues aside (once again – Nemosine do not make anything, they assemble – if that) the pen is still flawed. The plastic is weak and the body remains intact by virtue of the metal bands holding the blasted thing together. You can fix/tinker with the nib, but my pen has already cracked on the lip of the lid, and the general feeling it gives me is unsubstantial. Better to save your money and go with something worthwhile (or much cheaper) as I concluded in the actual review. 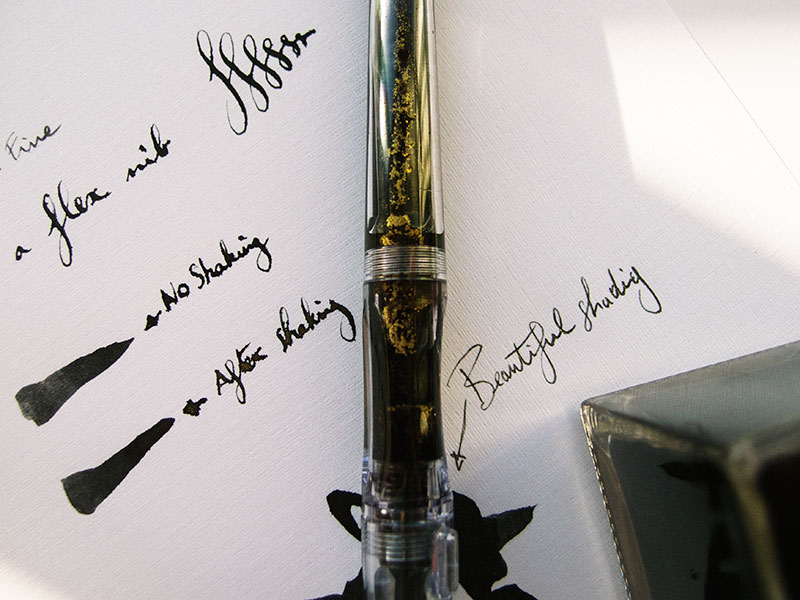