The Wing Sung 233 is in a lot of ways the quintessential Chinese “New Old Stock” fountain pen. Found on eBay at ridiculously low prices, it offers an interesting (albeit, plagiarized) aesthetic that doesn’t match up to the cheap pens of today. In particular, we have the standard 60s plastic body with the metal cap, and interestingly, in the 233’s case – a wrap around style nib that looks awfully similar to the Sheaffer Triumph.

I rarely handle these pens and think particularly positive things about them. In a lot of ways, modern Chinese manufacturing and tolerances have left them in the dust, but they do offer a window into the past and admittedly I do like inexpensive quirky options just for the sake of playing around with them.

Breaking the Wing Sung 233 down based on performance, it’s easy to see that this is a sub par pen. A modern Jinhao is infinitely better in terms of manufacturing consistency and overall finish. That being said, the Wing Sung does have a few (okay, one) tricks that modern “cheapo” (and expensive Western) fountain pens don’t have that forces me to give it a second look. 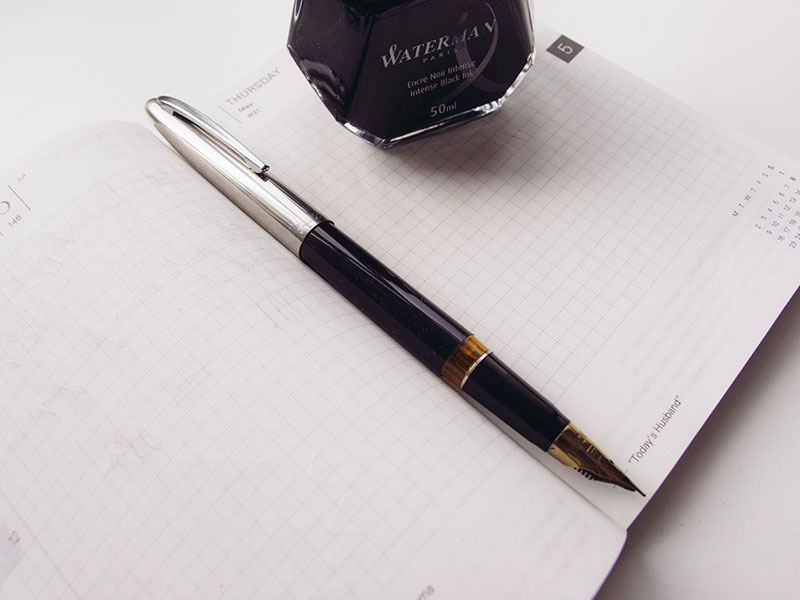 Right off the bat, I inked it and it worked perfectly on arrival. Didn’t even bother flushing (I know, I know – I am a rebel). Sadly, the pen kept on working even with the tines were not touching the paper. The result after 1 week was the entire nib and feed unit being clogged up with Waterman Intense Black residue. An odd happenstance, but with a pen that costs less than $2.50 delivered, it’s something that I just have to smile at.

Thankfully the total amount of ink capacity is limited and thus the resulting damage was dealt with very quickly. I would imagine that if you use it regularly on a daily basis.. this may not happen?

I currently have the pen inked on my desk. It’s like a ticking time bomb and I have no idea why. The lack of a removable nib means that adjustment is impossible and the feed is just plain weird. No idea what it’s made of. Looks like poor quality ebonite, but feels like plastic that was left in a bucket of salt for a few centuries. No real explanation as to why this happened. Feel free to chime in down below in the comments. 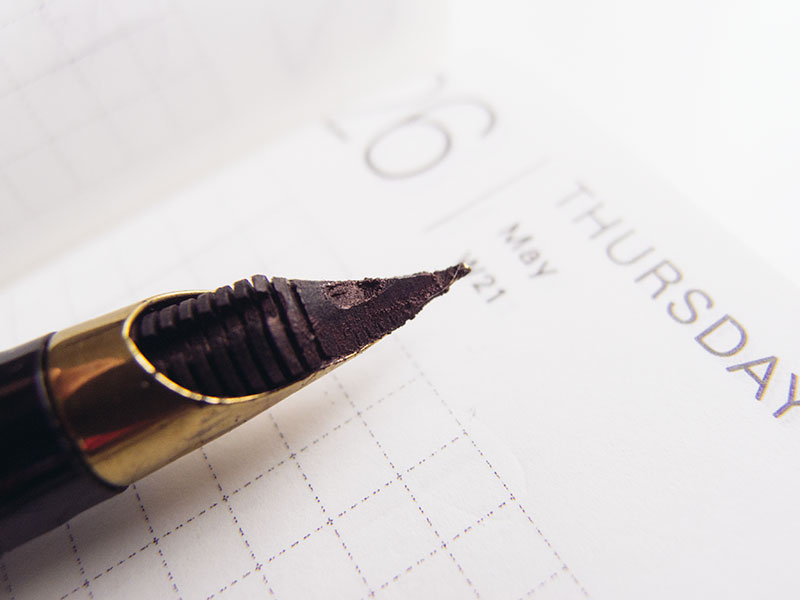 As I said, mediocre ink capacity; your standard Chinese squeezy mechanical ink sac nonsense. We abandoned that a long time ago, and it wasn’t soon enough, frankly. Only redeeming quality is that it’s…cheap? I don’t know. Originally had a metal sleeve over the sac, but it went walkabouts – maybe the cat stole it. In any case it’s horrible like all ink sac filling systems.

Be gone with you Parker 51 fans! I shan’t join your perverse cult!

Jokes aside, I like pistons > converters > eyedroppers in that order; so obviously, I am quite biased. You might say, “Hold on a minute there Thomas; it’s a plastic body with plastic threads – just convert it and shut up already!” But no, dear reader, Wing Sung saw fit to drill a hole into the butt of the body (they like to live on the edge) and this conversion is not recommended if you like your ink to stay inside your pen – albeit you could use Sugru to fill in the hole, but at that point, just buy the pen you want. 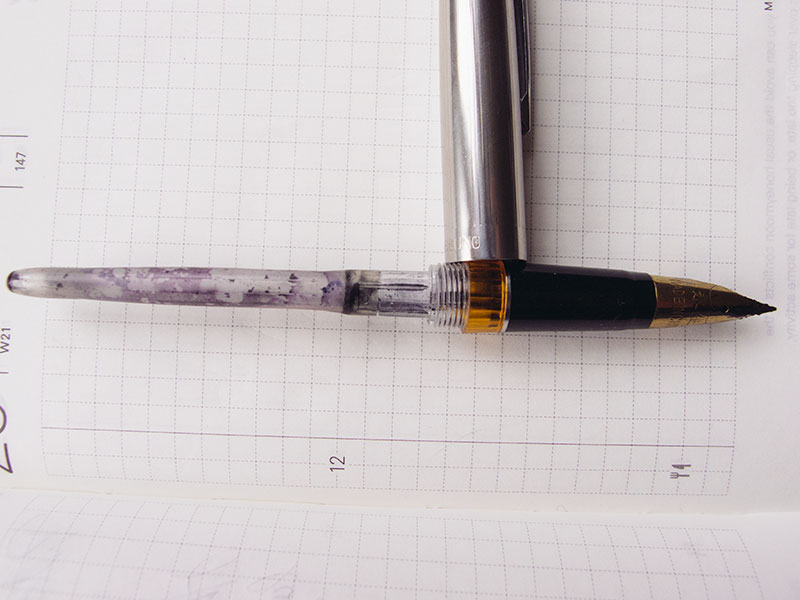 After discovering that the Wing Sung 233 decided to commit hara kiri, I cleaned it up very quickly and inked it up again. I should mention that it’s been a few days since the incident and the Wing Sung is behaving itself. Thus so far anyway. Perhaps it learned its lesson after I waterboarded it under the taps. 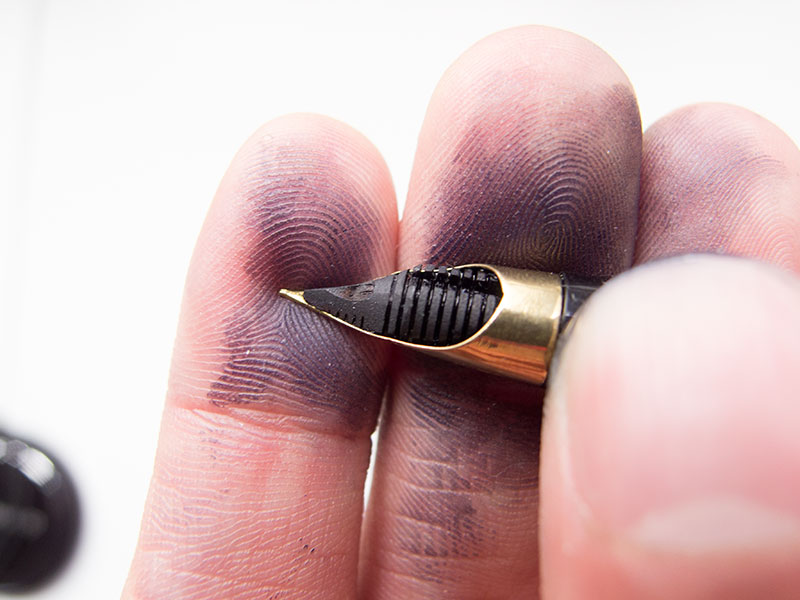 Outside of this inky mess, performance is solid. The steel nib is ridiculously wet to the point that I would be very cautious scribbling on anything other than fountain pen friendly paper. It’s relatively smooth (not glassy, but limited feedback) although the sheer amount of ink it cranks out goes a long way into smoothing over any writing issues. I know that the writing sample below shows some railroading, but I haven’t been able to re-create that so I would say that it was an isolated incident.

The pen is unsubstantial. It weighs literally less than nothing and the grip section is perfectly acceptable in a 60’s girth sorta way. Compared to modern pens, the 233 might be a touch anaemic and I can’t say I am sold on that taper, but on the whole it’s perfectly comfortable even if it’s not my “ideal” pen section. Hard to complain about smooth plastic.. everything. It’s like a slightly prettier Bic.

Please also note the hideous amber “ink window” that doesn’t serve any practical purpose. Out of the box, the pen has a steel sheath over the sac and even with ti removed you can’t see a damn thing, but then again tastes vary and some people may like this aesthetic flourish. 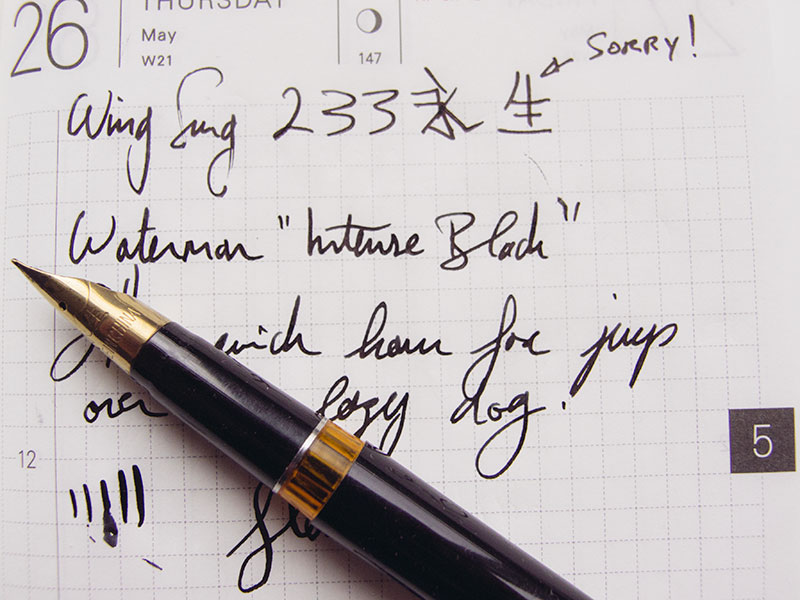 No flex, no real character of any kind. Its a Western F-M’ish with absolutely nothing to write home about except how much ink it dumps out. Which, as I said, is a lot. 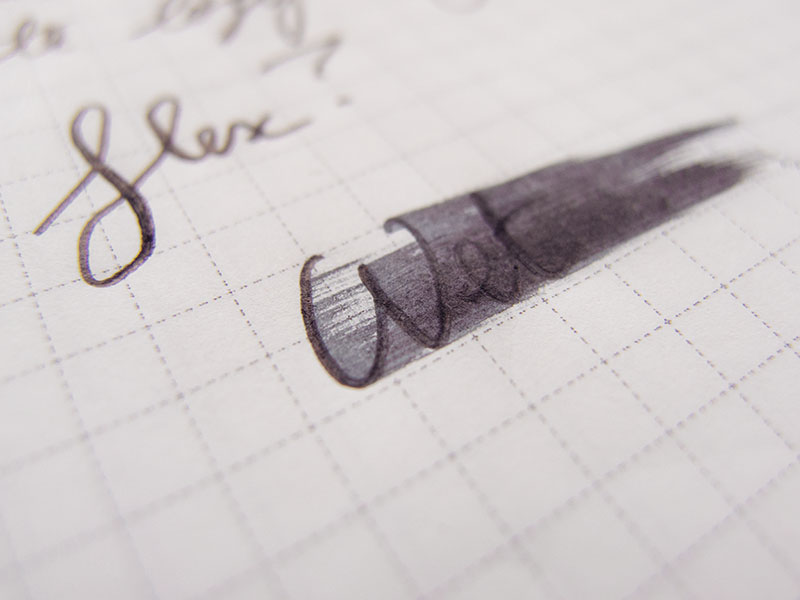 At this point you might be thinking, “What’s so interesting about this pen?” Well my inky fiends, this Wing Sung 233 has a very nice cap (relative to price & manufacturing period) with, I shit you not – a spring loaded clip. Not only that, but a perfectly executed spring loaded clip. I was shocked. Retention is perfect and frankly in terms of utility, it’s better than 99% of the clips on my other pens.

The cap is also nicely decorated with striations and is honestly pretty damn perfect. I have an expensive Chinese fountain pen ($100+ gold nib etc.) which has a cheap plastic sleeve inside the cap. This one has individual wings (5 of them!) soldered on the inside to grip the section (I assume it latches onto that little steel band under the amber ink window). 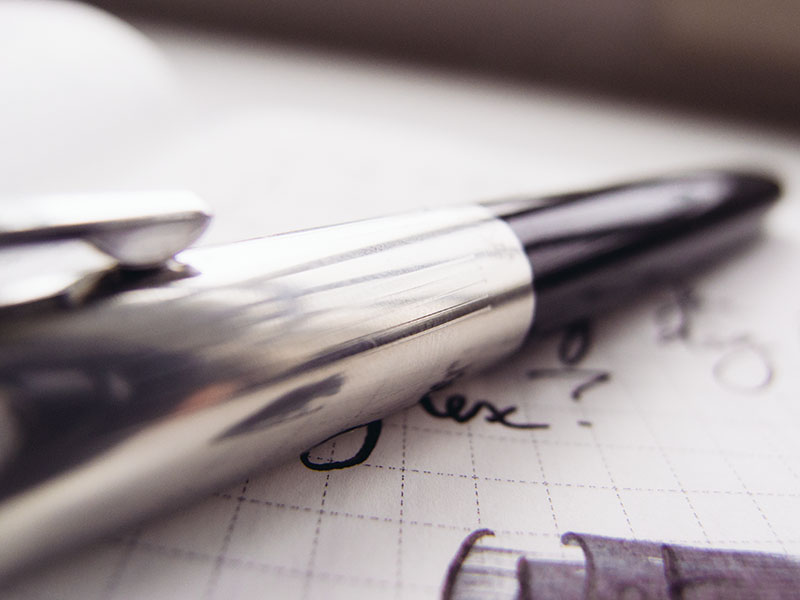 It’s always interesting to review these super inexpensive Chinese pens. I may have a positive experience and others the exact opposite. Maybe my Wing Sung 233 has a nib that was especially wet and if you buy it, yours will be dry as a bone. Consistency wasn’t exactly a PRC specialty, so bare that in mind. Maybe treat it like a lottery and live vicariously that way!

Ultimately, performance will be dictated by your particular example. If you want a solid, reliable scribbler for very little money pick up a Jinhao 992 (spoiler alert: it’s magnificent), otherwise treat this as a curiosity, something to enjoy sporadically inking up or displaying, but not really ideal for everyday use – especially in an academic environment.