I have been slacking with my review output recently and whilst I shan’t make excuses, the reality is that it’s all Platinum’s fault and not mine. I have been rocking the same pen over the past month and have had very little inclination to change it up. It’s a weird hobby, scribbling. I have so many pens, many of which I purchase out of curiosity, but I seem to always go back to the classics.

Anyway, to break this pattern of procrastination I have begun to ink up pens I dislike. I find it much easier to write critically than to wax poetics over pens I enjoy. Maybe that says more about me than anything else. 😉

The Hero 366 is such a pen. It’s everything that is wrong with the original crop of “China made” pens with little to no redeeming qualities. Be advised that if you own this pen and like it, you may be suffering from Stockholm syndrome and I recommend visiting your nearest Pen Clinic for assessment. 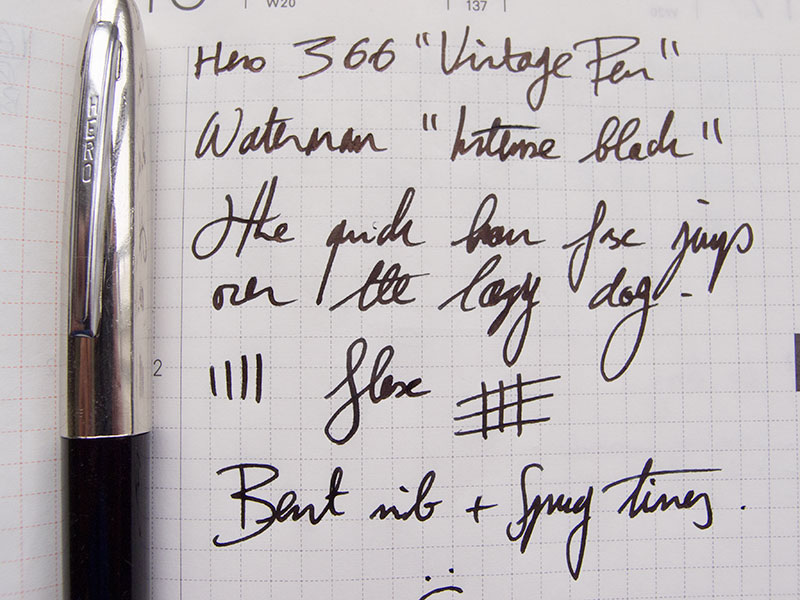 Right, so the Hero 366 is basically a cut down Parker 51. I know Parker 51’s have a cult following for some reason (don’t ask me why), but this is only superficially a Parker 51, so no need to eviscerate me folks. From what I understand, Hero spawned out of China when they bought the equipment from a Parker factory that was previously in the neighbourhood. Makes sense to me as this is almost perversely similar (on the surface) to 51’s, but in practice they took a simple design and decided to cut all corners and quality control mechanisms they could.

This is the end result. 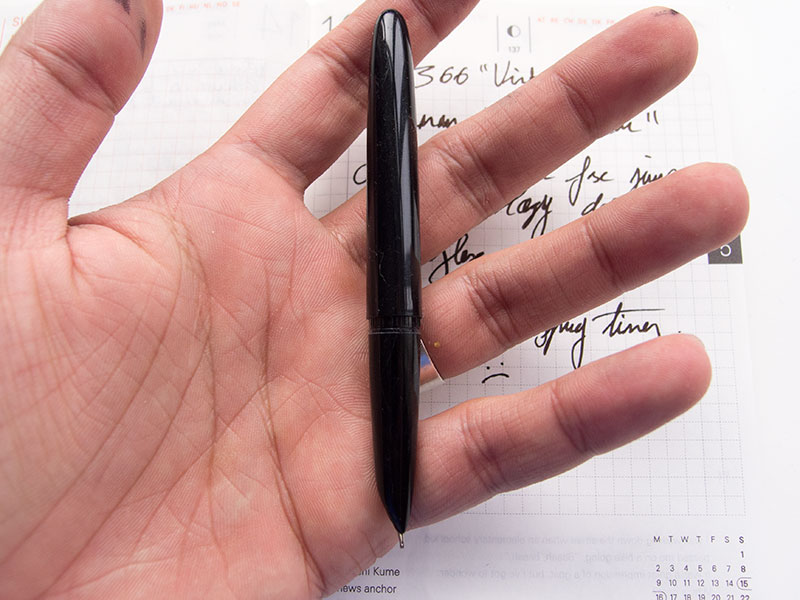 My core issue is that this pen is so cheap that a Bic feels solid by comparison. Super light plastic body, crappy hooded nib that’s unusable (more or less), and a generally unpleasant persona that makes you question why you are bothering with this tool when your computer is 2 meters away.

That’s the crux of my issue with these garbage tier pens. In this day and age, a fountain pen should be exquisite to use, or at least interesting. We don’t use them (practically speaking) for work so if you are going to wield one, it better be amazing. It should be noted that I am not railing against the Hero 366 because of its cheap price, but rather its cheap everything. Instead, you can buy a Platinum Desk Pen, a Pilot Penmanship, a Jinhao 992, etc. The list goes on. All of those pens are fantastic relative to price point. 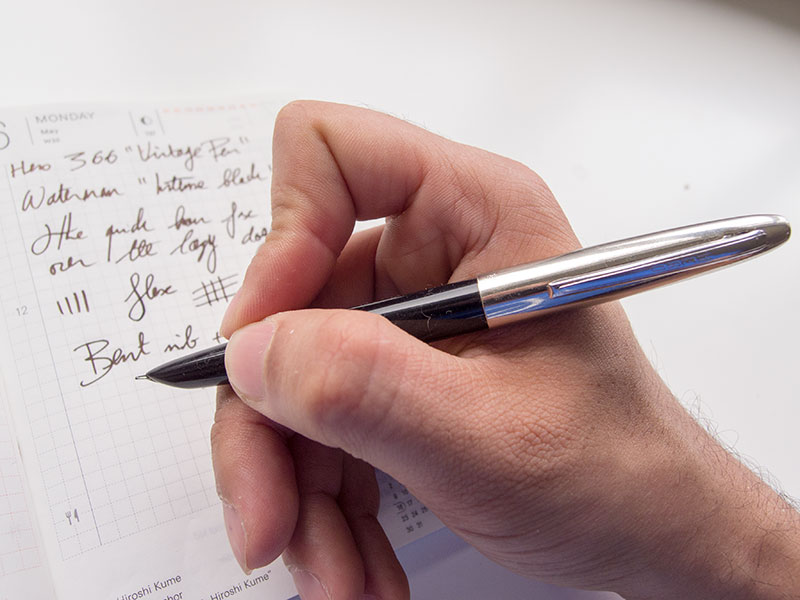 Surprisingly, a spring clip comes as standard. Maybe that’s the only somewhat redeeming factor, but frankly, even then its disappointing compared to the previously reviewed Wing Sung 233. It’s flaccid and generally depressing to use compared to a better, firmer alternative. 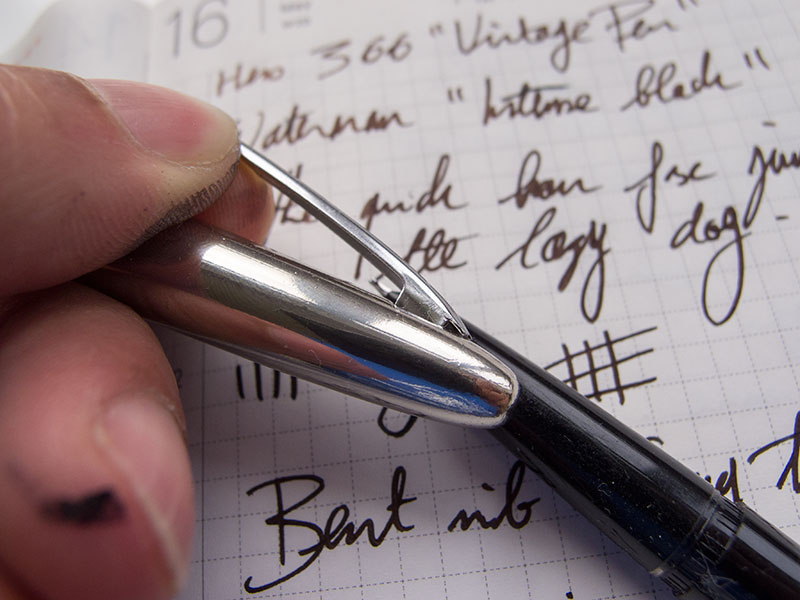 One of the few things I sorta like, and even then it’s a passive appreciation, is the filling system. It’s basically a bulb filler’esque design and it works (the system that is, the pen itself is barely functional). 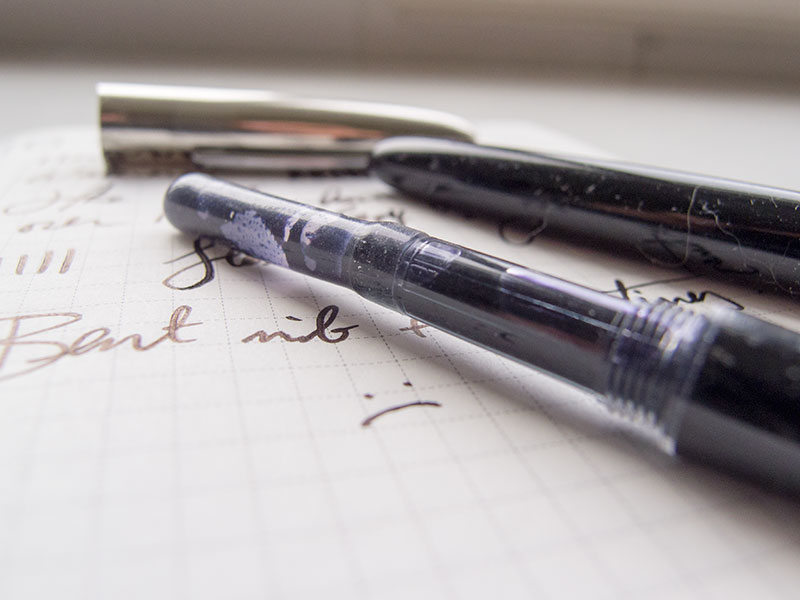 Onward to the only point that matters – the nib. Right off the bat, it’s somewhat bent. This isn’t the biggest issue (more on this later), but before I get into the nitty gritty, I want to promise that this is how it came out of the box. 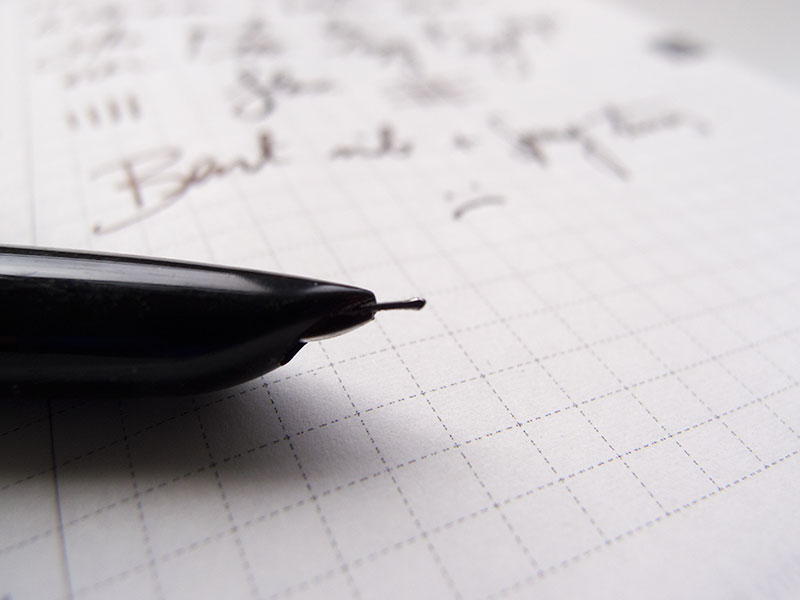 What on earth…? Those tines. Unforgivable. No pen should come like this out of the box. I have had pens where the tines pinched a smidgen too much and I had to work them to increase ink flow, but this is just grotesque for a pen in 2017.

To those of you who say this is because its a “vintage design” and “inexpensive so deal with it,” please see my preamble earlier on in this review, especially the part pertaining to Stockholm syndrome. 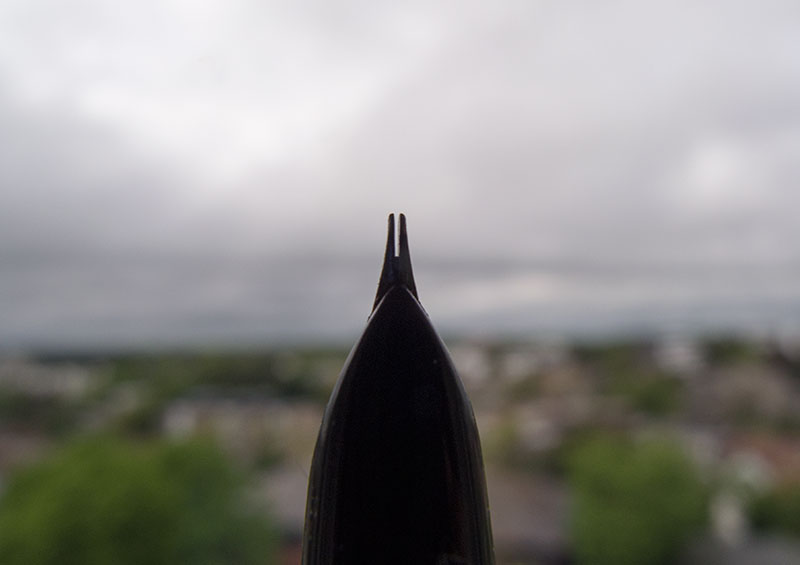 But does it scribble you ask? Sorta. If I prime the feed I can get it going. The sheer amount of ink splurging out insures a somewhat smooth line with no feedback, but it’s a jarring sensation. Like writing with a shovel – limited control exacerbated by how light and unsubstantial the pen is. When I say light, I mean sub 20 grams level of lithe. 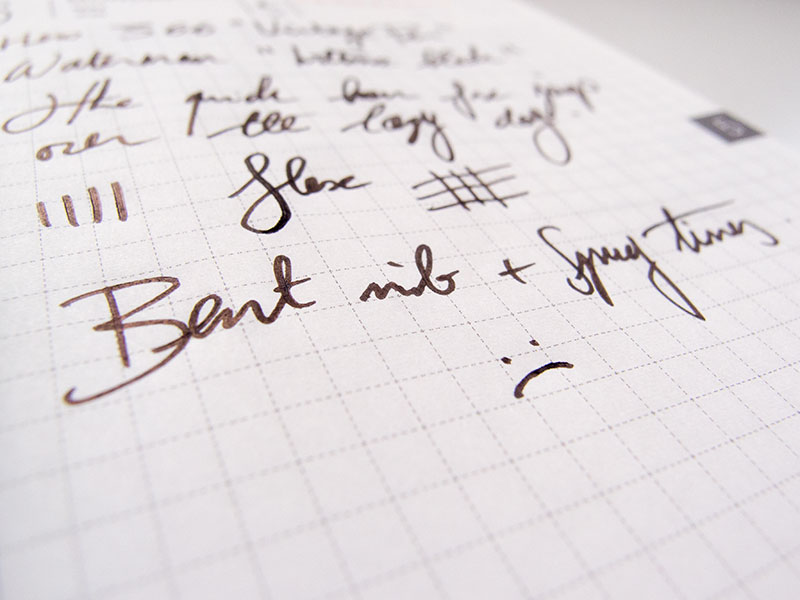 Sadly, if you rest the pen for 30 seconds or more (capped) the inkflow will simply stop and it won’t start up again without priming. See below (warning: graphic photograph) for the end result.

To use this pen as a pen, you have to prime it right before the tines dance on the page. Every. Single. Time. 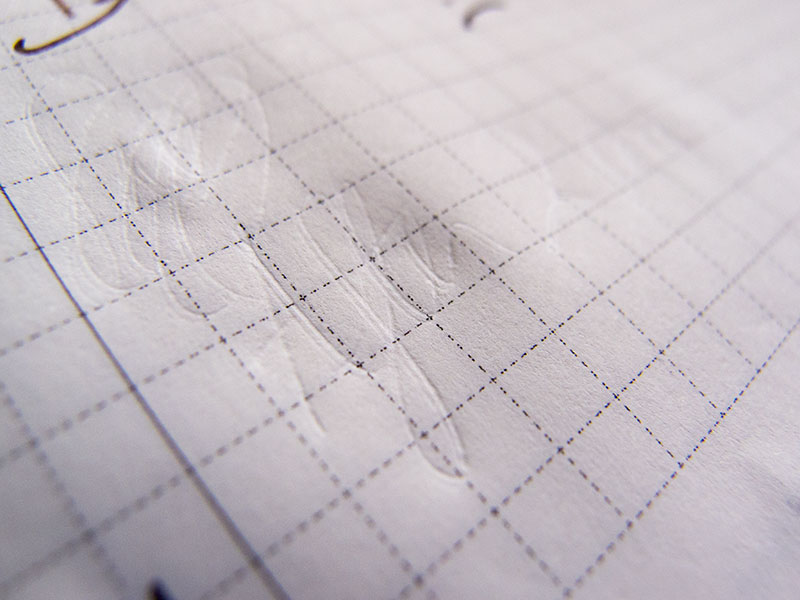 Grim stuff, no idea why people like these cheap Hero’s. Back in the day I can sorta get the appeal (no real alternatives at the $2-3 price point), but now you can buy any number of Jinhao’s with super original designs, a converter, and a consistent nib. So what gives? 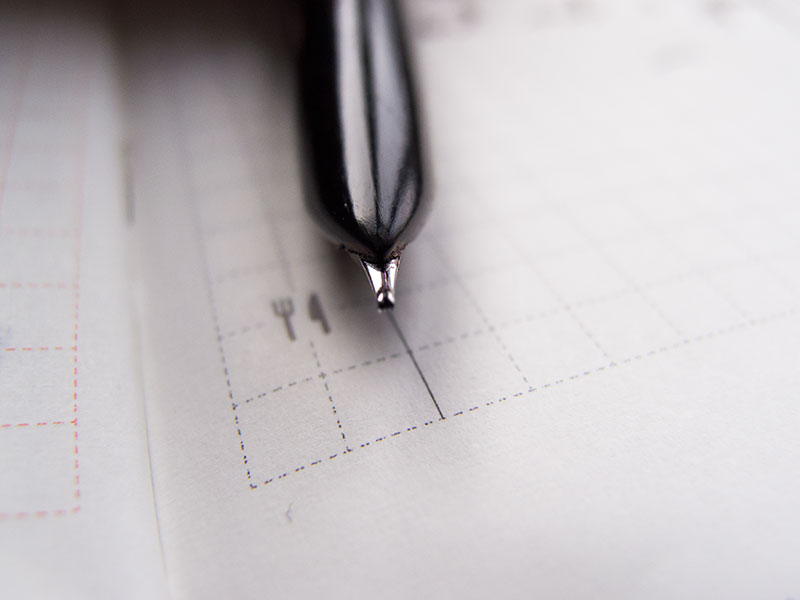 Don’t buy it. Get yourself a Jinhao 992 instead or any other modern inexpensive Chinese made pen. Emphasis on modern as the classic vintage stuff seems (to me) to be an exercise in shit quality control under the guise of vintage fidelity and price bracket. This is particularly disappointing as Hero can (and has) made solid fountain pens like the gold nibbed Hero 100, which I own and works perfectly.

Frankly, if I was Hero I would discontinue these legacy models (or greatly improve the quality control + materials) and write them off as mistakes of the past.

Because that’s what they are, mistakes. 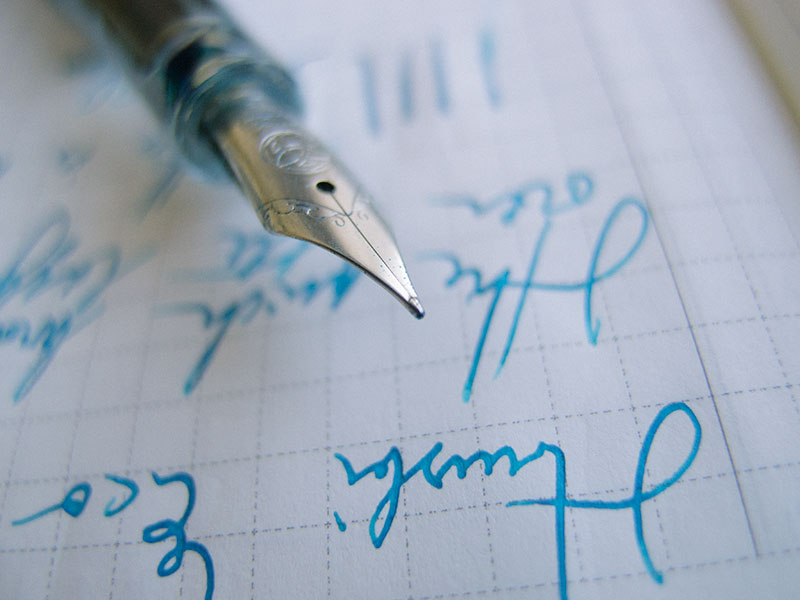